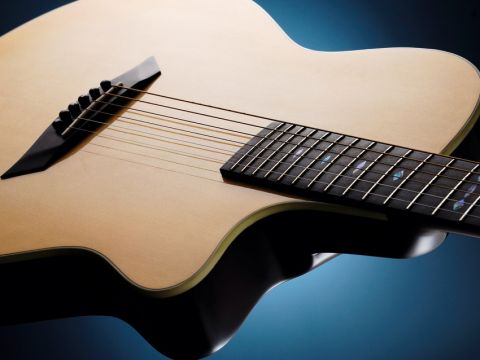 With the help of UK luthier Joe White, Mark Dorsett set about designing an acoustic guitar that would work for his own performance requirements. He then approached the Ayers factory in Vietnam (who produce guitars under the Ayers brand as well as for others, notably Baden) to create what we see here: the DRL Thinline CT09.

The concept of a stage-friendly electro is far from new and here the CT09's body is cut from a solid, one-piece mahogany slab. It's completely hollowed out, leaving quite thick sides and a thick back (approx 13mm). The top is more conventional acoustic: centre-joined European spruce with scalloped X-bracing.

In basic construction it's not dissimilar to Taylor's T5; likewise in size and shape - the CT09 is a little trimmed across its lower bout, with a broader waist and squarer curve to its base.

It's less contoured in depth too, a pretty much uniform 60mm rim thickness giving it more apparent girth than a T5, albeit with a similar overall weight. The neck is glued to the body (it joins at the 14th fret), although the joint lines are hidden by dark sunbursting in this area. But the heel is well chamfered and it's not overly bulky, although you will struggle to get to the 24th fret - if indeed you want to.

The neck, however, has a big rounded profile that's not overly wide but lacks a little finesse in its shaping - slight 'V'-ing to the shoulders would reduce the apparent bulk. No complaints though from the tidy fingerboard and fretting, not to mention the quite opulent and richly coloured abalone inlays and posh ebony-buttoned Gotoh 510 tuners.

Powering comes from an LR Baggs transducer under the intonated saddle on the well-shaped and comfortable ebony pin bridge. Mounted on the bass side, below the waist, are three rotaries (volume, treble and bass) rather than a preamp panel - there are no extras, but the MiSi active preamp is battery free, simply charged up via the endpin socket.

We've left a major feature of the CT09 out: as you can see, it has no soundhole on its top - instead we get three small soundholes on the bass side above the waist.

This, combined with the thin-depth design, creates a bass-light acoustic voice that feels and sounds a little tight, but certainly has more than enough volume. It's on a par with, for example, a Taylor T5 although to us it sounds, acoustically, a little more strident and pushy in the midrange.

But the CT09 is designed for onstage use, and although the MiSi system provides a fairly low output and might well need a little external lift, the centre-notched rotaries are all smooth in use. The treble control deals with the zingy highs and the bass control boosts or trims quite a low frequency.

While some players might feel they're short changed on the preamp control front, the actual tone is nicely even and balanced (aside from a slightly forward low E) and the lows we found lacking acoustically, sound full and quite rich.

There's an appealing dryness and clarity to the tone with little piezo 'cluck' and the sound is endearingly natural; the EQs are very usable, especially the treble, which can round out the zing for an even jazzier attack.

Background high-end hiss isn't excessive; feedback is well-tamed. By design and in execution, this is a rather good onstage guitar, provided you have an outboard preamp and tuner.

Nicely designed and competently made, this DRL Thinline is an attractive proposition for players who need an effective stage instrument without any fuss or over-fancy features.

Acoustically it's limited, by design, but those limitations work in its favour when plugged in and feedback should be much less of an issue compared to a standard flattop.

Its amp'd tone is more than acceptable - especially if you use an external preamp to bring out its best. However, despite the tidy price the DRL has some heavyweight competition. Yet it holds its own and the battery-free MiSi preamp could well swing it over less green and more expensive, power-hungry electros.