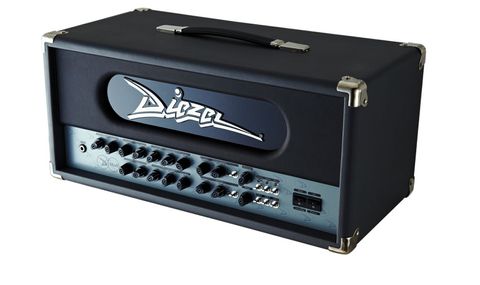 High-gain amps don't get much better than this, and not at such a realistic price. If you've got the wedge to consider a pro-level amp, the D-Moll has to be at the top of your list.

For many high-gain connoisseurs, a Diezel amp will always be 'the dream' - and one that's usually agonisingly out of reach.

Diezel's answer to that conundrum is the D-Moll (D minor in German), a 120-watt hellhound of an amplifier that comes in at £1,419. For a boutique brand such as Diezel, that's pretty astonishing, and it makes the D-Moll a viable alternative to the likes of Blackstar and Peavey, and cheaper than some equivalents from Hughes & Kettner, Mesa/Boogie and Egnater.

An astonishing six ECC83 valves power three very different channels, with the third channel sharing an EQ with the second to save on space (and cost). As with all Diezel amps, the clean channel sounds massive no matter how you dial it in: rounded and smooth with humbuckers, or spanky and cutting with single coils.

There's plenty of headroom, but the gain control will take you from slight breakup all the way through to a generous crunch. It responds brilliantly to your choice of guitar, and can carry you through almost any genre with a turn of a dial and the right pickups.

The second channel takes off from where the gain maxes out on channel one. The gain is more sensitive this time around, and bluesy, vintage-tinged leads cascade into highly saturated hard rock tones knocking on the door of classic metal. It's here you discover how much the mid-cut switch comes into play, which hammers the lower mids to give you a more aggressive tone. The intensity knob controls the level of the cut, while the level control next to it compensates for volume loss.

Unleashing the third channel takes the stoking embers of channel two and turns it into a raging inferno, offering massive amounts of gain but also a remarkable level of clarity. Down-tuned and extended- range guitars lap up the gain for spectacularly heavy low notes and expansive chords, and the sheer depth and low-end response works wonders for lead runs.

And all this is to say nothing of the extra features Diezel has thrown in. Presence and deep controls tailor the high- and low-end perfectly. MIDI functionality gives you the option to control the amp's core features with Diezel's own Columbus footswitch (£317) or any MIDI-compatible device (such as a multi-effects pedal). You've also got two switchable master control levels, ensuring the purest clean and filthiest dirt can always be matched up evenly.

It's this combination of advanced features and superb, genre-spanning tones that makes Diezel amps so special, and to see it in a package this well priced is very impressive.