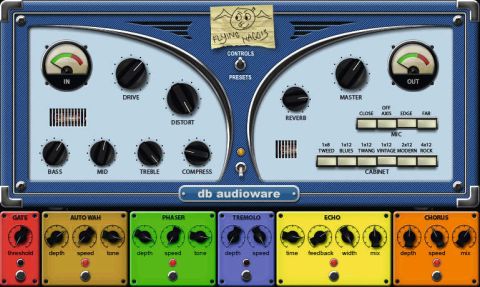 OK, it´s not the ultimate in accurate amp simulations, but Flying Haggis´ strengths lie elsewhere. Guitarists who are looking to test the digital waters should try it out.

Most amp sims are designed to offer a perfect reproduction of a set of classic amp and effects units. The bizarrely named Flying Haggis is different, though: the developers have that their goal should be to simply produce a set of tones that they think sounds good.

As appealing and impressive as slavish emulations are, Flying Haggis is a breath of fresh air. You have to judge the tones on their own merits, and not just on how close they come to certain classic ones.

The layout of the software is very straightforward, with the top third of the GUI being the amplifier section. On the left-hand side are basic EQ, drive and distortion controls and a subtle single-dial compressor that evens out the guitar´s peaks without destroying the tone.

The right-hand side houses a reverb, a master level control, a selection of six cabinet models (ranging from the bluesy 1x8 Tweed to the all-out 4x12 Rock), and four virtual mic positions.

There are independent in and out meters so that levels can be correctly balanced, and each has its own ‘virtual valve´ graphic which glows to indicate how hard the amp is being driven. Below the amp section is a line of six virtual stomp boxes: gate, auto-wah, phaser, tremolo, echo and chorus.

The layout is very guitarist-friendly, and it feels just like messing about with a real pedal board. The simple setup means that axe-wranglers who aren´t yet accustomed to dealing with compression ratios and tempo-synced delays can just turn the dials until they get a sound they like without feeling intimidated. What´s more, the fact that the pedals are always on display and that switching on one of the units takes just a single click makes experimenting with different combinations of effects very easy.

IK Multimedia´s AmpliTube and Native Instruments´ Guitar Rig are both quite expensive - in fact, many guitarists don´t actually own a guitar that costs as much as either of them.

This means there´s a definite demand for entry-level guitar plug-ins, and if you keep in mind who Flying Haggis will appeal to, it delivers. The sounds are decent, with the clean tones in particular being warm and full. The modulation effects are also good, providing subtle, understated tones (turning all the dials up rarely produces an unusable sound).

Our main gripe is with the cabinet models and the distortion tones, which are on the scratchy side. Some users may find themselves having to use an additional amp simulator to warm up these sounds.

However, it´s important to remember that Flying Haggis costs the same as (or less than!) a single hardware stomp box that would typically provide only one of the six effects that it offers alongside its full-on amp simulations. Comparing its sound quality to the more expensive software solutions on the market is like comparing a Squier Strat to a high-end PRS: pointless.

Bottom line? Flying Haggis fills a gap in the market. It´s an affordable and usable multi-amp, multi-effects unit that all guitarists will be able to grasp immediately.