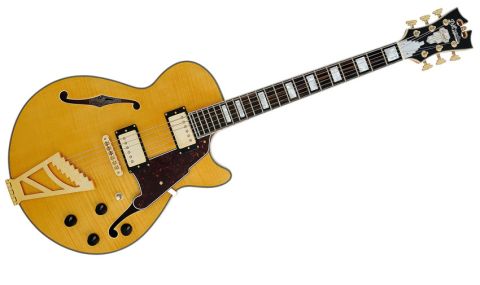 More compact and hollow-sounding than an ES-335: a superb jazz, blues and all-round vibe-y electric.

The new D'Angelico company is offering a range of all-laminate Korean-made guitars. Here we take a look at the EX-SS - a single-cut thinline semi.

John D'Angelico is revered as the foremost archtop guitar maker of the jazz age. Working with one or two assistants (including, latterly, James D'Aquisto), he made 1,164 archtops under his own name from 1932 until his untimely death, aged 59 in 1964.

As an example of the new D'Angelico brand, the EX-SS model mixes that old style with a more modern, broader-than-jazz intention. First off, it's a thinline with a rim depth of around 43mm. Across its lower bouts, it measures 380mm, just a gnat's under 15 inches, trimmer than the 406mm (16-inch) girth of the industry standard Gibson ES-335.

It's also a single-cut and has no centre block, although there is a sizeable 'U'-shaped maple block supporting a mahogany top block that sits below the tune-o-matic-style bridge connecting the top to the back. In addition, there's a shorter PRS-like scale length of 635mm (25 inches).

Another difference here is the all-laminate flame-maple construction. It features traditional acoustic-like kerfed linings, but without the dual parallel top braces: it's the quite bulbous arches of the top and back that create the structural integrity, along with that bridge block.

A nice vintage-y yellow tinted finish overlays the subtle pinstripe flame of the maple facings, also giving the edge binding a slightly yellowed, aged hue. It all adds up to a lightweight semi: a USA Gibson ES-335 feels like a huge solidbody by comparison.

The EX-SS isn't short on bling, with the same gold-plated hardware but a slightly smaller headstock and Stairstep tailpiece. Here, we have two Alnico V Kent Armstrong original PAF-style humbuckers. There are no surprises with the wiring, but the black ebony knobs with three fine white line position markers look especially cool.

While the EX-SS has little acoustic volume, it's lively with a noticeably lengthy sustain tail: more solid sounding than a hollowbody, but more hollow than an ES-335. The humbuckers are fairly hot in output (both with a similar DC resistance of around 8.5k ohms) and sound electric-like.

The neck humbucker is jazzy, for sure; with the controls all up full and for any players crossing over or delving into jazz styles and harmony, this is probably the perfect place to start.

But with four controls and a bridge humbucker it's certainly not just a 'jazz' guitar; the mixed position adds a nice funk and of course offers lots of shades if you use your controls. The bridge pickup on its own now sounds a little too spiky by comparison, but the slightly nasally midrange honk really suits some light crunch.

Nevertheless, it still has that hollowbody darkness, which underpins the voice and makes it just as at home with 50s rock 'n' roll as 60s soul, blues and pop, and whatever modern variations you mix up into your own music.

A slice of the past, definitely, but one that seems remarkably contemporary for today's retro-based musician. The EX-SS has real tonal legs, but still retains an older hollowbody character, a darkness and openness that suits classic styles; at lower volumes, too, it sounds wonderfully trashy when plied with gain - superb for bluesier, rootsy slide or earthy rockabilly and Western swing flash.