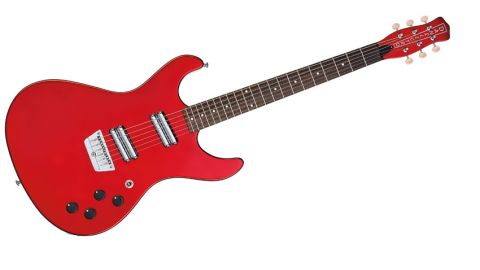 One for the player who fancies typically quirky Dano performance without too many vintage visual overtones.

Since Danelectro first got back into instrument production in 1998, the company has mainly revived original Dano designs from the 50s and 60s. However, the new Hodad guitar rehashes a model that first appeared back in 1999.

Back then, this was the first modern Danelectro not to revisit the brand's past, because its surf-style, leftie-look body shape was borrowed from equally eccentric American maker, Mosrite.

Like other recent Danos, the new Hodad comes from Korea rather than China, which echoes the origin of the 1999 version. The latter also appeared in bass, baritone and 12-string guises, and the line continued until 2003, when the company quit playing the electric game.

Danelectro reversed this decision two years later, and has now reissued the Hodad, but this time only in six- or four-string formats.

This new version of the Hodad shares many features with its predecessor, but an obvious exception is the guitar's headstock. Unlike the original's offset outline, this adopts the company's classic Coke bottle shape, plus a much shallower back angle. It also replaces contemporary-type tuners with vintage Kluson copies, while the truss-rod adjuster is moved up from the body end.

As on the 1999 Hodad, a graphite nut supplants the trademark Danelectro aluminium equivalent. The latter often suffers from string-snagging problems, so this nicely cut alternative is very welcome.

The lightly radiused rosewood fingerboard still carries 21 frets, all smoothly finished and spread over Danelectro's standard 635mm (25-inch) scale length. Easy playability is enhanced by the well-proportioned bolt-on maple neck. On the original Hodad, this was natural and satin finished: on this it's high gloss, and matches the body colour.

The sizeable slab body keeps the kilos down courtesy of Dano's usual semi-solid construction, which features a plywood frame faced front and back with Masonite (hardboard). This sports an excellently applied Metallic Red paint job that, true to tradition, is contrasted by cream vinyl tape around the sides.

The Hodad hosts twin humbuckers, as the original did: each comprise two lipstick-cased single coils on a shared baseplate. Both pairs are mounted at a matching angle, and height adjustments are made via screws through the body, back in the time-tested Dano manner.

Circuitry also stays the same, with a chunky three-way toggle partnering a control quartet of individual volume and tone pots. The latter incorporate pull/push switches: one for single-coil operation, while the other puts the pickups out of phase when both are selected.

The bridge/tailpiece is similar to the 1999 version, which updated the original Dano design by replacing a single wooden saddle with six metal examples. These allow individual height and intonation adjustments, but alterations are hampered by the saddle-securing screws being sited directly beneath the strings. The saddles are slightly shorter and also broader than before, which provides a little more playing space.

As usual, the bridgeplate rests on two height-adjustable screws at the front, while a third anchors the back end to the body and affects downward angle. Strings reside in a raised lip along the rear edge, and this section is now a little sturdier, which might help the baseplate resist sagging under sustained string pressure - a common defect on many modern Danos.

The original Hodad came with an optional separate bridge and Bigsby-style vibrato tailpiece, but this interesting alternative is no longer offered.

The Hodad has a typically warm-ish, honky acoustic resonance, with adequate rather than impressive sustain. The brand's lipstick-cased single coils aren't overly hot, and even though combining two as a humbucker naturally increases output, the results are still quite lean and clean.

That said, the neck pair supplies some juicy low-end to partner an inherently sweet and clear treble, while the brace at the bridge adds midrange and a brasher twang. The switch's centre position provides both pickups in series, which is a long-standing Dano circuitry trick to boost volume and increase control flexibility.

Engaging single-coil operation thins things out, so sounds become more taut and snappy, while the phase-reversal facility offers the expected funk-friendly nasal tonality. This actually makes more aural sense under dirtier conditions, but the other sonic options work well in either context, ranging from clang and chime to gain-laden grit and spit that, usefully, retains good definition.

Danos were always cheap as chips, but find a good one and you'll find some very usable, characterful tones on tap. This Hodad makes a great starting point.

The Hodad guitar's styling certainly sets it apart from other Danelectros, while its electrics are equally unique. Although there are still plenty of typically retro touches, its actual performance suggests more modern styles than many of the model's more vintage-orientated stablemates - a combination that makes for an interesting and individual six-string.