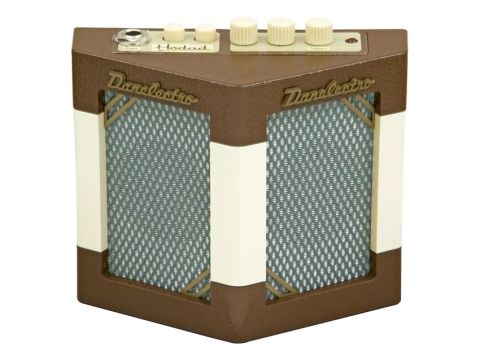 A fun, albeit not very loud mini amp that has retro-style and a tiny price to boot: every desk should have one.

Originating from 1950s American beach slang, the term hodad refers to a faker or a copycat, and was initially used to describe someone impersonating a true surfer.

Here, Danelectro has taken the distinctive look of the original Watkins Dominator - hence the name, which was also applied to a quite original guitar, of course - and fused it into a desktop amp. Its V-fronted, brown and cream plastic exterior keeps the original look, while the cream knobs and silver grill cloth further add to its vintage appeal.

Powering this mini retromonster is a standard 9V battery - or a nine-volt, centre-negative power supply - making the Hodad very portable despite having no belt clip.

This little amp doesn't pack a big punch, but offers ease of use and some weird and wonderful noises when needed. The echo is fit for fifties-style slap-back delay and works well with the gain turned right down.

The tremolo has a fixed, fairly abrupt waveform and spans slow to medium throbs. The gain control isn't much use past 12 o'clock, as it becomes too mushy and distorted to make out your chords. For the best results we set the amp to clean and just rockabillied away.