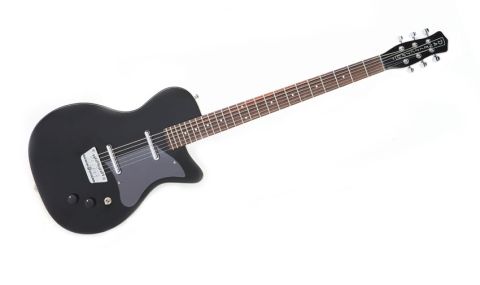 However you use a baritone, '56 is a damn good place (and time) to start.

There's no doubt about it: the baritone's back. Maybe it's because extended-range guitars are such an everyday sight, or manufacturers are just getting bored of churning out instruments in the same ol' tuning, but we've seen more than our fair share of 'tones over the past few months.

What better builder to add to the pile, then, than Danelectro, which was the first company to launch the electric baritone in the late 1950s - and its new '56 Baritone pays homage to that bygone era.

While some baritones offer guitar-like 648mm (25.5-inch) scale lengths, this is a traditional 'tone, with a guitar-meets-bass scale of 755mm (29.75 inches), which ships tuned a perfect 4th lower than standard tuning (B E A D F# B).

Long-necked beauties like these need strings to match, too - they're typically strung with 0.014 to 0.068 or 0.013 to 0.062 gauges. You'll struggle to emulate the wailing bends you wring out of your regular electric, but this isn't designed for widdly solos; the '56 Baritone is a rhythm machine.

If you're yet to experience a 'true' baritone, it could feel like that neck goes on forever - and the 24-fretted fingerboard further reinforces that impression. Dano's typically lightweight Masonite body construction means that the neck is a little top-heavy, too, so make sure you don't let it drop! None of these teething problems matter as soon as you strum your first chord, though: the '56 Baritone sounds massive.

If you've read any of our other Dano reviews, you'll know that we love the company's lipstick single coils - the '56 Baritone takes their versatility to another level. The neck pickup is perfect for bass- heavy grooves on the low B string, while flicking to the bridge pup engages a biting twang more akin to a traditional guitar - using the selector switch is like switching between instruments, rather than pickups! The middle position, which, in traditional Dano style, runs both pickups in series for increased output, gives you gnarly overdriven tones - perfect for thrashing out punk and indie riffs.

However, as well as their distinctive tones, Danelectro models are known for occasional quirks in build quality, and this is no exception. Remember we said you'd struggle to bend those thick strings? Well, the fourth string on our review model had a habit of popping out of its nut slot when we attempted a wide vibrato or hit the open string with force. A new nut or deeper slots could fix that here.

Build quality aside, the '56 Baritone has us hooked. You never know how useful a baritone could be to your sound until you play one: it bulks up recordings, and even fleshes out live performances, treading the line between guitar and bass.