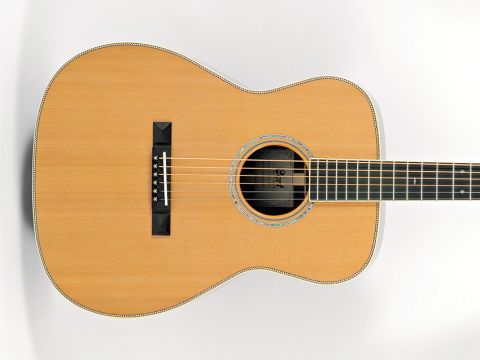 A great little blues-voiced guitar - Cort should be on to a winner here.

South Korea-based Cort Guitars is a giant of the guitar manufacturing world. For more than 50 years it has produced a large range of electric, bass and acoustic guitars for distribution, not only under its own name but for other guitar companies.

In recent years, smaller outfits known for extremely high quality (and high-priced) guitars have utilised Cort to produce more affordable models. One such company - Avalon Guitars of Northern Ireland - enjoyed rich rewards when it contracted Cort to build lower-priced models for it in 2004. Today, Cort's annual production totals more than a million units.

However, in an effort to prove that it's not merely a box-shifter, Cort has recently released a stylish range of acoustics, which give evidence of detailed craftsmanship, attention to detail and quality design.

The new range, named Luce (the Italian word for 'light'), focuses on small-bodied acoustics and electros with price points ranging from £189.95 for the entry level L100 models, through to £499.99 for the premier L900 models. All models within the range are available in both parlour and concert body sizes.

An all-mahogany affair, finished in matt, the L450C looks to offer something a little different at what is a very affordable price tag.

Tasteful and discreet binding complement the understated abalone soundhole rosette and rosewood scooped bridge. Cort's website states that this model comes supplied with a tortoiseshell pickguard, though on our review model this is missing. No bad thing in our opinion, for the L450C looks good without one.

Again, the open-geared Grover machineheads are Cort's choice of tuners and the two-piece mahogany neck is attached to the body utilising a dovetail joint.

Curiously, on this model, the workmanship around the nut, neck joint and headstock areas is of a superior standard than seen on the more expensive L900C. In terms of its finish, the L450C is very tidy indeed and, bearing in mind its modest £280 price tag, there are really no grounds for complaint.

The L450C is something of a pleasant surprise. Punching well above its weight, this little gem belts out a powerful full-blooded tone that, while it couldn't be described as delicate, certainly has character.

As you'd expect with an all-mahogany guitar, the mids are right up front and both chord work and single-note runs are clear and bright. The dry, gritty tone particularly suited playing thirties and forties Delta-style blues - we find ourselves gravitating to old Robert Johnson and Big Bill Broonzy standards.

With the mid-range so present and with a medium gauge pick in hand, we find the L450C is also particularly good at handling semi-muted, percussive rhythm styles.

If you've had your fill of dreadnoughts or jumbos, Cort may yet have a little something for you here. The L450C's tone won't suit every genre or style, but what it does, it does very well and we'd suggest that it would make a fantastic blues guitar for those that rarely venture out of 12-bar territory.

We are somewhat smitten with the L450C. In consideration of the fact that you'll get change out of £300, it's a well designed, built and finished guitar. Its classic looks harmonise with its great blues tone.