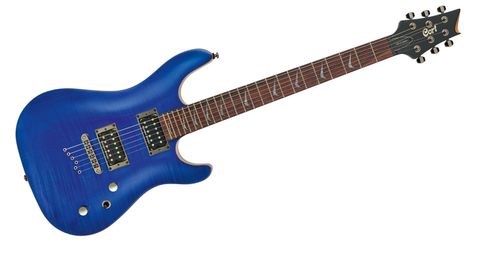 It may be a bit vanilla for some, but this is a great-playing slice of contemporary electric.

No prizes for guessing the inspiration behind this one, but the top-end KX-Custom gives you a luxurious Bright Blue Burst-finished flame maple top and natural edge binding, locking tuners and flawless build quality.

Although the KX has a thinner body than its chunkier Z-Custom cousin, it still possesses that distinctive mahogany-maple combo, recalling PRS's Fender-meets-Gibson tonal ideals.

We're not completely sold on the backwards Nike 'swoosh'-style inlays, but there's a lot to like.

With 24 chunky frets spread over a 648mm (25.5-inch) scale length, the KX-Custom lends itself well to lead playing, especially with that generous cutaway for upper fretting. It's a great all-rounder, and its tones are positioned slap-bang in between the Cort G280 and Z-Custom, too.

There's plenty of treble bite with a healthy but not domineering bottom-end, delivering polished tones, whether clean or dirty. They might be a little polite for some, but it's a blank canvas that accommodates any style.

Contemporary rock à la Alter Bridge? Bread and butter. Metal? The JB's mighty output will see you right. Jazz? Flick over to the toasty neck humbucker. Soul, funk, blues? That's what coil-splits are for, and while the tones are bulkier than a Strat's, they're more than up to the job.

It may be a bit vanilla for some, but this is a great-playing slice of contemporary electric. That said, the price is slightly higher than similarly versatile PRS SE Customs, so it's worth playing before investing.