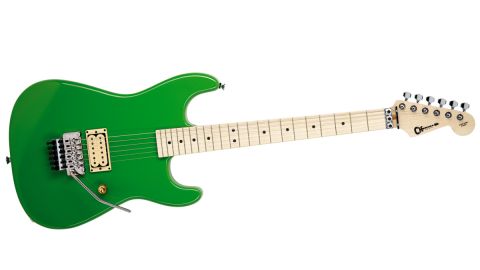 A unique opportunity to customise an instrument from a world-famous brand, at a great price. Whether you're brave enough to go for 'Slime Green' is another matter...

Although the Charvel brand has been around since the early 1970s, a newer generation of guitarists may have only recently met its acquaintance via the newly released Guthrie Govan signature model.

But since Fender bought the Charvel brand back in 2002, a modest number of San Dimas models have been finding their way to these shores, with the greater number of these coming from Japan.

What you may not know is that Charvel has been operating a Custom Shop for over a decade, inviting you to build your dream guitar with its very own master builders. As you would expect, access to the Custom Shop can be a relatively expensive affair and one that yields a waiting time of between 12 and 18 months.

Recently, however, Sheffield-based Rich Tone has procured exclusive access to Charvel's new 'Custom Select' programme, which grants you access to Custom Shop-built guitars, but instead of having carte blanche with specifications, there is a fixed (but extensive) menu of options to choose from: all the way from the type of body wood used, to the style of truss rod.

Some selections will carry an extra cost - such as specifying birds eye maple for the neck, or the addition of a maple cap to the body - but the vast majority of options are free of charge. The only constants are the neck carve, body shape and headstock.

This model, spec'd by Rich Tone, harks back to the 'superstrats' originally created by founder Wayne Charvel back in the 70s, where he'd made his name running a custom shop repairing and upgrading Strats. So, as per the original traditions of Strat hot-rodding, you won't see some of the modern design tweaks incorporated in today's souped-up double- cuts, such as an ergonomically sculpted neck heel or a lower horn cutaway.

In brief, the spec includes a quartersawn maple neck with compound radius fingerboard, medium profile frets and an original Floyd Rose bridge. Steve Vai fans will recognise its appearance as being similar to his famous 'Green Meanie' Charvel; though with the appointment of just one pickup, this is a more stripped-down version, electronically speaking at least.

It's fair to say that Charvel's neck carves are well known in guitar-playing circles as being a benchmark of playability and comfort. Perhaps a little skinnier that San Dimas necks played in the past, this one still manages to comfortably fit your palm courtesy of a very modern-feeling elliptical carve, with a sturdy set of shoulders providing consummate support.

The tactile gun-oil finish to the back of the neck adds another level of comfort. The medium-gauge fretwire seems an inappropriate appointment for an unabashed rock guitar, but the vintage aesthetic has not been transferred to its playability, as being able to feel the wonderful satin smoothness of the unfinished maple 'board under your fingers enhances the playing experience even further.

The sole humbucker may fill some guitarists with trepidation: combine this with the omission of any tone control and the guitar looks positively naked! But the DiMarzio Evolution humbucker chosen here is perhaps best known for its appearance aboard Vai's basswood-bodied JEM, and placed in this alder body it screams equally as loudly, though with substantially more top end.

The overall tone is like the appearance: a homage to those hot-rodded, iron-pumping double-cuts of the 80s. You have to admire its 'you want rock - you got it!' appearance and the way it wears this lack of the versatility proudly on its sleeve.

The Custom Select concept itself is worthy of great praise, especially when taking into account the relatively very low price for what is almost a full Custom Shop experience - particularly considering the huge range of options on offer.

The potential purchaser may select an entirely different spec to this one, which is why it's perhaps fairer to judge the guitar on the ever-present body shape and neck, which are simply top-notch and demonstrate exactly why, almost half a decade later, a USA Charvel still remains an aspirational purchase.

However, on our review guitar, there were two very minor QC issues - the area of the neck behind the 3rd fret not being perfectly finished, and some unpainted wood underneath the vibrato backplate - but this is an early example model and certainly not indicative of the high quality and attention to detail we've experienced from both Charvel USA and Japan.