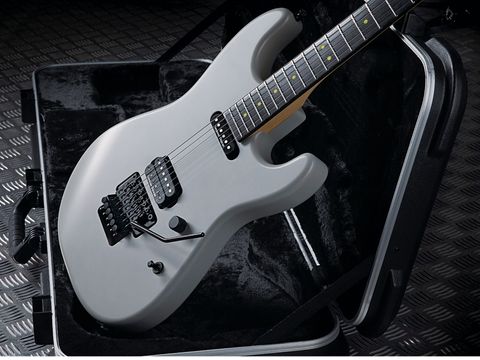 Guitars don't come much more stripped-down than this. Grab a brush and have some fun while you rock.

We've previously covered a couple of Charvel's Pro Mod Wild Card guitars, models that are released every quarter in limited numbers with a unique spec, and we signed off our January 2011 review of the flame-topped Dead Calm Aqua model with heartfelt wishes that the next example would be 'a graphic-clad eye-popper'.

Trust Charvel to think outside the box in this regard then, as this latest Wild Card, the seventh in the series so far, is finished in a grey primer - or base - coat to allow for the application of your own design.

As with the remainder of the San Dimas series, the guitar is built in Japan and enjoys a high-end spec that includes a pair of US Seymour Duncan pickups - a JB TB-4 humbucker and an STK-T1 single-coil - and an original Floyd Rose double-locking vibrato system. Unlike a San Dimas Style 1, the Wild Card's Floyd is recessed, and the super-low action and fat frets give the guitar a truly classic rock feel.

Irrespective of the number of contradictory spec sheets we've come across online, the body wood here is alder and the base will take all types of material commonly used to graphically jazz up a guitar's livery, from a haphazard scrawl with a permanent maker to a fully realised, multi-layered airbrush design in the style of Jackson Custom Shop artist Jim O'Connor.

Realistically, you'll need to remove all hardware from the guitar before undertaking such a task, and we'd wager that masking off the headstock's yellow Charvel logo would require skills akin to those of Fabergé.

The one-piece quartersawn maple neck features a thick ebony 'board, the edges of which are hand-rolled for extra comfort, and the 22 3mm frets have been impressively topped. The slinky playability of Charvel guitars has always been one of the name's major plus-points, a tradition that's continued here.

If we were to nitpick we'd point out the fact that the bridge humbucker has been screwed into its pocket a little off-of-centre, but skewed pickups never did Eddie Van Halen any harm, and the rough and ready vibe afforded by the finish, or lack of it, here eloquently harks back to the brand's '80s origins.

Historically, of course, hot-rodded Charvels often featured just one humbucker, so the provision of the neck-mounted single-coil does allow for a more versatile performance.

Acoustically, the guitar gives a nice 'brang', one that is translated to tone when plugging in, especially when using the neck pickup for cleaner passages. It has a nicely hollow character to it and, with use of the vibrato and a touch of reverb, is good for Beck-style glissandos and spurts.

Still, turning up the gain, flicking to the bridge 'bucker and crashing a big A chord is far closer to the Charvel ideal and the combination of the JB with a Floyd always leads to rock fun. Old-school Van Halen licks, Mick Mars divebombs and Warren DeMartini runs have the right amount of tonal authenticity, and such is the output of the pickup that it keeps its tonal edge as the levels of gain approach metal settings.

The Wild Card #7 stays in tune perfectly and, as ever, the neck is a dream to play; all that's left is to pick a design and begin the colouring process. It costs less than £100 more than the production San Dimas and So-Cal designs and, thanks to the configuration of pickups, is arguably more tonally versatile.

Only Charvel could get away with producing an unfinished guitar, but that's exactly what this instrument is. We had no problem with the flamed-top livery of previous editions but this, to us, is truer to what the brand should all be about.

Try one, and allow your imagination to run wild.