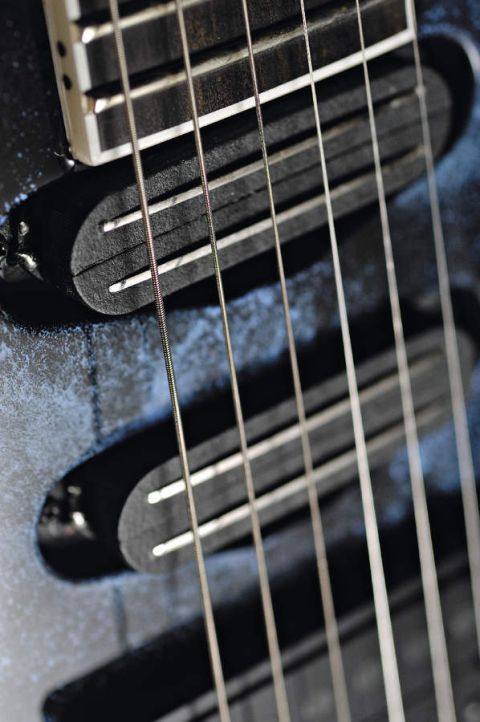 As a tool with which to create your own rock voice, the TAT is a contender, even if the ultra-light floating whammy and unusual pickups, take some getting used to.

In the current musical climate, where bands aretrawling various resources and retail outlets to find a vintage instrument with which to ply their trade, it's refreshing to be faced with a guitar such as the TAT.

Its vibe and spec echoes the halcyon days of the original Jackson Soloist, early ESP custom models and even the much-welcomed original designs from Ibanez in 1978 following the infamous Gibson/Norlin legal wranglings.

The TAT boasts what the company describes as a through-neck design that echoes the first Caparison guitars, produced in 1995. We must point out at the outset that the neck doesn't actually go 'through' the alder body - it stops short of the vibrato cavity.

This degree of compromise, however, is counteracted by the fact that the three pickups are mounted on the maple tongue that extends beyond the 24th fret.

Irrespective of the minutiae of the neck's construction, the heel and body cutaways are smooth, beautifully contoured and shaped for maximum comfort.

The Jackson roots are undeniable here - the feel of the neck, best described as having a very flattened rear, is virtually indistinguishable from those of current USA-made Jackos. And believe us, that's a good thing.

For example, if the Ibanez Wizard neck is too thin, or the classic Dean 'V'-profile is just too vintage for your shredding needs, you'll get on with this like a house on fire.

The conical radius, from 350-400mm adds to the very impressive playing experience and you can give yourself a very low action without any discernable loss of tone. The 24 frets are amongst the biggest we've ever experienced.

We love the Devil's Tail headstock design - which incidentally also allows for an unusual 2+4 configuration of cosmo black Gotoh tuners - and the exclusive clock-face inlays. The time depicted on each inlay relates to the fret of their specific location: three o'clock at the third fret and so on.

The body here is constructed from a number of layers of solid alder - at least four from our count - glued together horizontally and the finish has been flawlessly applied.

Unlike many double-cut S-derivatives - including the Caparison Dellinger - the TAT's neck has a reasonable back-pitch, plus an arched body in the area behind the bridge. It arches away from the bridge towards the endpin and results in a guitar that wraps around you more than a Fender Stratocaster, for example.

The pickups here also originate from the Caparison drawing board and comprise a ceramic bridge humbucker and a pair of dual-rail blade 'buckers that are slightly more hefty in size than a standard single-coil: the neck unit is also ceramic-loaded while the middle is based around an Alnico magnet.

As well as a standard five-way lever selector, the master tone control is also a push/push switch that coil-splits both the centre and neck pickups when they're being used. Position two on the five-way splits the bridge humbucker and combines it with the middle coil.

As you'd expect, a quality double-locking whammy is present and correct: a black Schaller S-FRT II that apes an original Floyd Rose down to the collar on the arm. The bridge is set floating, with the two pivot posts the only point of contact between it and the body wood.

This type of vibrato's set-up certainly does impinge on the depth of any electric's tone - just ask Eddie Van Halen - but, with a suitably crushing amp tone, a basic hard rock rhythm tone is more than satisfying in its breadth.

With mega gain levels and not enough output volume dialled, we found the sound tends to become skinnier and overly toppy but, for the shredders out there, pinched harmonics become an absolute cinch.

At the other end of the spectrum the clean tones are magnificent, with all pickup settings offering a twangy, expressive performance with a ring of sparkle.

In fact, as you navigate towards classic rock tones, that polish remains apparent and we did come to the conclusion that the middle pickup in full 'bucker mode gave a smoother, more traditional tone due, no doubt, to the Alnico magnet. What's more, you can add more gain here for extra sustain without affecting the warmth too excessively.

The split neck pickup is warmer than that of a Strat, yet still offers the sparkle and for blues licks and solos that should come across as wholly familiar yet somehow sonically different, we can't think of a rock guitar that does it better.

In fact, the overall versatility afforded by the switching options here is mind-boggling, allowing you to realistically veer from a choppy funk tone to full-out rock very quickly and efficiently.
All of this is really very impressive, provided that you can live with a potentially sun-bright rhythm tone or two…

If you're used to handling a floating Floyd Rose you shouldn't experience any issues here.
With an upward movement of the G string in the region of five full tones and down to infinity, the TAT is a real alternative to the Ibanez JEM if Vai-style insanity is your milieu.

On the other hand, obviously, be aware that any country double-string bends will send all strings out of tune…

While wearing its classic axe influences on its sleeve, the TAT happily messes with the formula to create a surprisingly versatile instrument that's well worth a try if you're looking for something different.