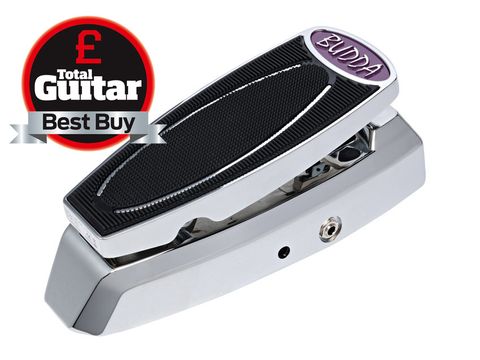 One of the pricier wahs on the market, but you certainly get what you pay for with this quality pedal.

Budda has grown considerably over the past 15 years. Having started out building boutique amps, its first foray into the world of effects was the Budwah.

Visually, this shiny lump reminds us of a sleeker Vox Clyde McCoy wah, and is possibly the funkiest piece of chrome-clad guitar paraphernalia you're likely to step on this year.

Budda tells us that at the heart of the pedal is a custom designed inductor, based on the Fasel inductor (kind of like the flux capacitor of wah pedals), which was used by Vox and Dunlop to produce a more vocal-like 'holy grail' wah sound.

Apart from the highly polished chrome and talked-up innards, the Budwah is a straightforward animal. As with many wahs, you plug in, stomp the switch beneath the toe end of the rocker pedal and you're away.

What's waiting for you is a wah sound that lives up to Budda's claims: thick filtering without disruptive low end honk or overly harsh resonant peaks at the top end. It sweeps smoothly from heel to toe-down when rocked slowly, and produces a funky gyrating swirl when you let your foot go in spasms on the treadle.

There's plenty of choice when it comes to wah pedals - some cost a lot less than Budda's offering - but in the £150 to £200 mark, it more than holds its own. If you're upgrading your wah, try it out with a few others and we think you'll hear the difference.