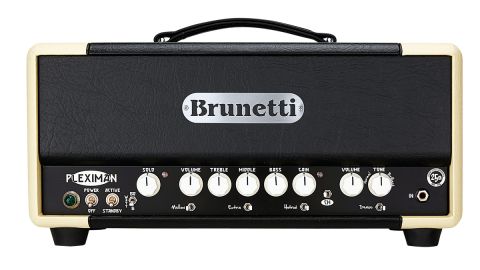 If you're looking out for an amp that has the fabled 'plexi' tone but with an extended range of features, give the Pleximan a go.

Italy has a place in history as one of the world's top guitar and amp manufacturers, although it's often unfairly overlooked.

Based in Modena, not far from where Ferrari builds its cars, Brunetti Amplification has a similar reputation for build quality and high performance, together with a particular style that's refreshingly different from the majority of British and American products we see.

One of Brunetti's latest products is the Pleximan, a beautifully designed and put-together amp that celebrates 25 years of amp production with a real boutique vibe.

This compact, lightweight all-valve head is easily carried in one hand and has a plywood cabinet neatly finished in cream and black vinyl. It's as hard as nails and built to survivein the pro touring arena. The electronics live inside an exceptionally clean open-ended tray chassis and comprise two main circuit boards: one for the front panel controls and switches, and a larger one holding the main components, including all the valve bases.

Both boards are very high quality, with metal film resistors and Wima 'pink brick' capacitors throughout, for precision and low circuit noise.

The Pleximan is a proper two-channel head. Channel one has a simple volume and tone control arrangement, with a small switch called Dense that adds extra lows, while the tone control works in the reverse to what you'd expect, reducing lows and mids as it's turned up, shifting from a vintage feel to a more modern voicing.

The lead channel has a familiar gain, master volume and three-band EQ arrangement, together with three small toggle switches.

There's also a 5/50-watt toggle switch that lets you drop the power down to five watts class A - one tenth of the Pleximan's 50-watt Class AB output rating.

The last control on the front is the Solo level knob, which adds up to 10dB of volume boost for soloing, or any other time you need it. This feature - like the channel switching, Hotrod and Dense functions - is footswitchable from the rear panel, which also features a valve-buffered series effects loop and a pair of speaker outs with switchable impedance.

The Pleximan's simple clean channel has a punchy, fast response. The simple but effective tone control makes it easy to dial in almost any guitar, and for our regular Strat and PAF- loaded Les Paul, the ideal position is almost exactly at the hallway point, which gives the widest possible range in both directions.

The Dense switch adds powerful low-end grunt for extra weight to mild single coils, but can be a little too much with humbuckers.

The Lead channel's sonic inspiration is obvious, with an aggressive attack that leaps out of the loudspeaker. Used at lower gain settings, you can easily dial in great British rock sounds from the 60s/early 70s.

The passive EQ controls work smoothly, the Mellow switch softens the treble for the warmer, woody attack of the early 'plexi heads', while the Extra switch pushes the midrange forward but without the nasal honk that some amps of this type suffer from.

This one works best with the Hotrod switch, which adds an extra gain stage for a great 80s-style overdrive and distortion. Strats sound great on this channel, but the punch of a good Les Paul really brings it alive, with plenty of harmonic overtones and a very vocal sustain.

This amp has a lot going for it: it's compact, good looking and built to an exceptional standard. Like many boutique amps, it's dialled into a specific range of sounds aimed at those looking for an alternative to the traditional EL34 choice. It sounds terrific when teamed up with a standard 4x12, the low-power switch is great for home or studio, and as a live tool, it's loud and satisfyingly effective.