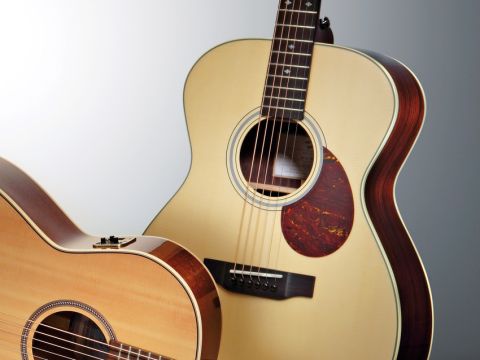 The trouble is that the trusty budget box you started out on no longer cuts the mustard, and you're ready to splash out on a much better-quality guitar - almost certainly an electro - and are budgeting around £1,000, or even a bit more.

The most obvious candidates might be, say, a dreadnought or grand auditorium, but at the same time you're rather drawn to the idea of a mid-size instrument.

You'd be right to be so. OMs and 000s - so-called 'folks' - can be excellent all-rounders. They're more comfortable to handle, without necessarily sacrificing much in the way of unplugged performance, and are often easier to gig, tending to be less prone to feedback.

There's also the inkling that a cutaway may adversely affect acoustic sound quality, which it can. What are the non-cut options, then? Well, the choice isn't exactly huge, but this model - from a major, well-respected name - could be just the ticket.

As one of Breedlove's Retro series guitars, this OM understandably evokes a vintage-inspired aura, conveyed not least by the spade headstock carrying a set of open-geared Grove Sta-Tites, and also its traditional belly bridge.

It's a deep model, too: a capacious 117mm across the baseblock. A nod to modern practicality is found in the second strap button at the heel - annoyingly missing from the Seagull Maritime SWS Folk HG QI.

Accompanied by a clean Engelmann spruce top, the body is edged in cream plastic with black/white purfling strips and rosette, while the bound rosewood fingerboard has slot-diamond markers.

The full-scale, three-piece mahogany neck adopts a medium span and shallowish 'C' profile, and it's a delight. It's fast and snug in the hand, immaculately polished fretting enhances the comfort factor, and bridge string spacing is a versatile 55mm.

Thanks partly to its deeper soundbox - and certainly not inhibited by the laminated sides - it delivers enthusiastically. The unplugged sound is warm and resonant, yet with a clear tonality, while generous dynamics and sustain emerge easily.

At its best when used with plenty of gain, the Baggs system does a largely very good job. The presence and treble controls add sparkle not harshness, and bass offers an ample range. But the mid-range is wanting a tad and even with a fair bit of cut, the sound retains a vaguely 'cardboardy' edge.

This is hard to eliminate completely onboard, but an amp tweak could well sort it.

This guitar falls firmly within the classic Martin OM/000 genre. However, its slim, fast neck means that the Breedlove can be regarded as a general-purpose contender, although that's not to say it isn't a capable picker. Sound-wise, the Breedlove has great unplugged verve, and its excellent, gainful amplified repertoire is impressive.

Build quality and value? We've no big complaints about the former: workmanship here is impressively tidy. As for value, it throws in a hard case, too. An extremely well-delivered instruments.