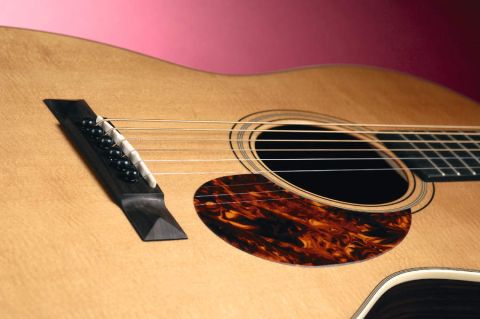 An impressive, desirable interpretation of a vintage 000 at a tempting price.

A well-made and fine sounding instrument!

Breedlove's public perception over the last couple of years has tended to centre on its mid-price, Far East-sourced Atlas Series, which has successfully introduced the brand to a much wider customer base.

However, this is not to say that things haven't been happening back at the company's thriving US Custom Shop operation in Oregon.

In 2005 it introduced the Revival Series which, as the name suggests, harks back to vintage flat-top designs, presently embracing dreadnought, OM and 12-fret 000 body styles and available in Standard or Deluxe trim, as well as a raft of Custom options to special order.

The impetus behind the Revivals is to offer traditional alternatives to the established Breedlove designs where such features as deep-swept cutaways, lightning-flash bridges and the JLD bridge trussing system are distinctive if arguably quirky hallmarks.

In short, the Revivals aim to lure to the brand those players who perhaps considered that Breedlove was previously too unconventional for their tastes. Let's take a closer look at an example.

Inspired by Martin's vintage 000, this 12-fret picker has all the elegance you'd associate with the genre - the elongated body with its svelte, round-shouldered profile, retro detailing like the pyramid-end bar bridge and, of course, a slot headstock with open-geared tuners, in this case a surefooted set of Grover Sta-Tites.

Available with mahogany or rosewood back and sides, ours is an example of the latter, topped by a high-grade, ivoroid-bound Sitka spruce top rich in lateral silking and stained to a warm cedary hue with an aged toner.

Bracing underneath is a pre-war forward X pattern, common to all Revivals.

As a Standard model, the guitar is finished to a low-gloss sheen, involving a process not dissimilar, say, to Avalon's. After the main coats of catalysed polyurethane are applied and rubbed back, the final treatment is a hand-waxing using fine steel wool.

If viewed in a certain light and at certain angles it is possible to see faint rubbing lines, most noticeably on the headstock's ebony overlay, but the overall effect is very smart indeed, and beautifully smooth to the touch. It also endows a mellow, aged patina from new, which is appealing.

Attached using a Taylor-style bolting system, the full-scale one-piece mahogany neck is, as one would expect, shaped for fingerstyle.

Span across the nut is 45mm with proportionately generous string spacing, while the 57mm spacing at the bridge is an equally airy proposition.

In pursuit of vintageness Breedlove might have been tempted to fashion the neck to a 'V' profile but instead - wisely in our opinion - it's an evenly rounded affair, with a moderate depth that offsets any risk of the grip feeling overly broad.

Add in the finish's gossamer-like touch and the immaculately dressed fretting, and the result is an unequivocally slick player. The only inherent caveat is that you won't be heading up the dusty end too often, but that goes with 12-fret territory.

This might only rank as a mid-size acoustic, but it has a zest and punch that can mix it with the bigger boys.

The delivery is upfront and projecting without sounding harsh, there's an unforced responsiveness to the dynamics, while the tone sits pleasantly mid-way between bright and warm.

Considering the rims aren't much over 100mm deep, it packs a respectable low-end wallop too, with a nice snappy attack when you dig in. This is more than a one-trick pony.

That setting-up annoyance aside, these two Revivals are enticingly good, especially the robustly voiced 000R.

Workmanship and detailing are pretty much impeccable, inside and out; they're both great pickers without the handling compromises that sometimes go with wider-neck acoustics, and prices are keen given the all-round quality.