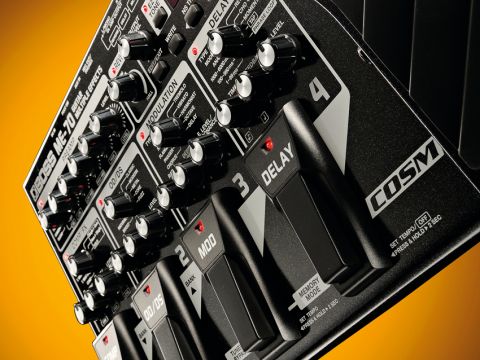 The ME-70 is a great introduction to the world of floor-pedal multi-FX with some quality tones and hidden gems.

BOSS multi-effects units have developed in two parallel product ranges over the last decade or so with the ME series appealing more to players with lower budgets and less complex requirements, while the GT units are generally more expensive and more sophisticated.

In a similar sense, DigiTech has its RP and GNX units. However, DSP power and digital modelling technology have now reached a point where even a 'consumer' model can pack a serious sonic punch. If the user interface is right, these units can satisfy the needs of some pro players, too. So, take the popular ME-50, add COSM modelling, extra effects and looping - and welcome the ME-70.

BOSS has provided plenty of real-time control here. Like the previous ME models, the ME-70 works more like a 'virtual pedalboard' than a standard multi-effects unit. In the default Manual Mode, the four footswitches correspond to four effects modules: compression/FX, overdrive/ distortion, modulation and delay.

The exact nature of the first module isn't immediately apparent from its name, but in addition to compression, it also covers wah, pickup simulation, fretless simulation and the famous BOSS Slow Gear effect.

The other side of the control panel is dedicated to the other effect modules, with a row of standard amp-style controls for the preamp model, a single reverb control, the master output level and a rotary switch for selecting the effect controlled by the expression pedal. This effect is only engaged when you click the switch situated under the toe end - normally it works as a volume pedal.

With a quick push of footswitches three and four, you're into Memory mode. Here you have 36 factory presets and another 36 editable user memory locations. You can buy plenty of multi-effects units with a lot more presets nowadays, but 36 should be enough for most people.

We'd be more concerned about the lack of bank up/down footswitches: if you want to change bank mid-performance, you either have to bend down to push a button or use an external footswitch. Manual mode is clearly intended to be the main focus here!

Whichever mode you're in, the EZ Tone function gives you a good starting point for constructing your own sounds. Each effect type has a number of 'optimal' factory settings saved as an EZ Tone, and these can easily be summoned up by means of the effect module's 'type' knob. You can also overwrite the EZ Tones with your own ideal settings.

With a choice of six main amp types modelled in the preamp section, you can quite easily run the ME-70 directly into a PA, mixer or soundcard. However, if you decide to plug into your favourite guitar amp and use the ME-70 purely for its effects, it's easy to turn off the preamp module.

There's actually a useful bonus here; instead of simply switching off the preamp, you can set it to 'EQ', which gives you a four-band equaliser instead of having the amp models.

The ME-70 can be powered either from six AA batteries or a BOSS PSA adaptor. The unit comes with a free set of batteries, but you'll have to buy the adaptor separately, which seems a bit of an odd cost-cutting measure.

Does anyone regularly run a multi-effects unit from batteries? We'd rather see Roland add a tenner to the price and supply a proper adaptor with it.

Distortion with phaser, reverb and delay:

The ME-70 may not have as many amp models and effects as some modern units, but there's nothing important missing; a good core collection of sounds without too many arcane options.

The six amp models cover the majority of well-known amp styles. They all sound familiar, not just because they're pretty convincing emulations of the real amps, but also because the signature COSM tone has been with us for nearly 15 years now.

COSM amp models have a tendency to be a little brighter and more immediate than the Vox or Line 6 equivalents, but they record very well and sound well-defined even on vintage-voiced humbuckers.

One thing we like is that the preamp module hasn't been lumped together with the distortion models. It's nice to be able to mix and match amps and pedals, and this really opens up the choice of overdriven sounds; although the Marshall and Boogie amp models are particularly suited to this sort of thing, we found some great tones by adding distortion to the clean amp model.

Despite the relative simplicity of the design, BOSS has still found space within the budget to include a couple of tasty extra features. The Phrase Looper is one of the delay effects, and offers up to 38 seconds of loop sampling with as many layers of overdubbing as you want.

Also, the speed of modulation and delay effects can be controlled from the expression pedal, which is a useful extra function to have, especially if you decide to add an optional extra expression pedal.

The ME-70 takes primarily a 'virtual pedalboard' approach, due to its lack of easy bank switching in Memory mode. While that might be a turn-off to those of you schooled in modern multi-FX units, it makes far, far more sense to anyone more used to 'normal' pedals.

As a result the ME-70 might look under-spec'd compared with its nearest rival, the DigiTech RP500, but that's partly because BOSS has emphasised different features.

Where the ME-70 scores is that it's a great-sounding, user-friendly product.

The 38-second phrase sampler (previously seen on the GT-10) is impressive at this price, and the amount of real-time control is a treat. That means the knobs and switches are very close together (without the protective rail of the GT-10) so watch those size 12s!