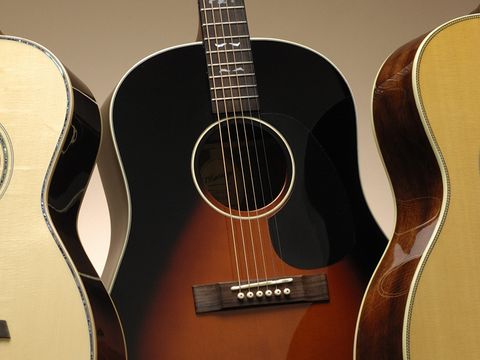 A sunburst, all-solid J-45-style acoustic for this price? It's a winner.

Blueridge's BG-140, from its Historic Series, pays a nod to Gibson's slope dreadnoughts - or Advanced Jumbos in Gibson-speak - which first appeared in the mid-'30s.

In typical fashion, Blueridge adds some of its own distinctive cosmetic touches to the instrument's mahogany back and sides design.

The timeless elegance of the BG-140's slope-shoulder lines, and the de rigueur vintage sunburst top, ably conjure up the aura of Gibson's original Advanced Jumbo designs, onto which Blueridge has imprinted its own personality.

The fingerboard, for example, carries a series of leaf-shaped pearl markers, while the neck is topped by what the company calls a 'Century Wreath' headstock.

With a wide crown and inlaid with torch-and-leafage motifs and the distinctive scroll logo, it's not the most elegant peghead we've come across, but it has a suitably retro flavour, set off well visually by the ivoroid-buttoned Kluson-style tuners. It's a shame, though, that the tuners themselves are very stiffly geared.

We'd normally expect to see Blueridge's hallmark dalmatian-tortie pickguard, but for some reason the one used here is plain black.

The BG-140's neck is of a regular span, with a shallow, flattish-backed 'C'-shaped profile. Gloss lacquered, the neck is a super-slick, speedy handful that plays like a dream.

String spacing at the bar bridge is a little tight at 53mm, but not so cramped as to inhibit fingerstyle forays.

Perhaps thanks in part to its shorter 629mm scale length, the Blueridge offers an enjoyably supple response, not only in string feel but in sound too.

With a sweetly bright tone, easy sustain and adequate low-end warmth, the delivery is encouragingly fluid and zestful, while volume and projection are up to standard for a guitar of this body size.

Save for the Blueridge's unacceptably stiff tuners letting the side down a touch, the standard of construction and presentation is commendably good, with very few cosmetic aspects that are below par.

Indeed, taking its cue from the illustrious originals upon which it's based, the trim and finery on each displays excellent taste, and conveys the vintage aura intended. Value for money isn't an issue either, and don't forget that a case is included in the price.

The Blueridge is especially enjoyable for its free-flowing strums, and gives a good account of itself sound-wise.