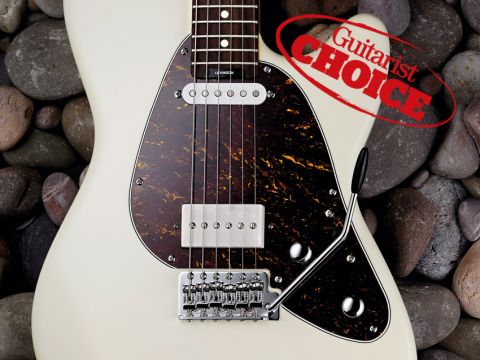 A serious minded mid-price electric that covers plenty of tonal ground and looks unique to boot. One for anyone looking to stand out!

We've looked at the Japanese-made Dayton Custom in the past and, as befitted its high-end spec sheet, wide range of terrific tones and custom shop conception, it came with a hefty four-figure price tag.

Christian Hatstatt is second-in-command at Blade/Levinson Guitars, and he also had a hand in the inception of the original Dayton, so we asked him to remind us of the concept behind this Chinese version of the design.

"The idea was to create a new guitar shape based on a single cutaway in order to bring in the Telecaster-type influences and, as we also wanted to make it a very versatile instrument, we wanted to install two [types of] pickup.

"On the original Dayton Custom we used a neck singlecoil and bridge humbucker, because these were the two most evident choices. But, although this worked well, it did need a little more originality. So we created the Dayton Standard using a neck single-coil and a P-90-type bridge pickup."

The pickups are designed in-house by Gary Levinson himself and are the result of many months of hard toil, with the aim of producing units specifically for the new Daytons.

The bridge pickup on this model is a humbucker-sized Alnico II loaded P-90 that really looks the part under its nickel-silver cover. Then at the neck, we have a vintage-voiced single-coil that's based around Alnico V rod magnets. These are controlled by single volume and tone pots, as well as a standard three-position lever selector that boasts a Tele-style switch cap.

Current Blade guitars seem to sport a number of slightly different bridge designs. Here the unit in question is the M-54, a traditional Strat-inspired vibrato that comes out of the box set flush to the body, and one that's furnished with 'tone balance string spacing'… that's a new one on us.

We'd describe the saddles as notched, but it's accurate to say that when bending any of their number, they don't slide across the metal to any degree.

The neck is made from a single piece of Canadian hard rock maple that's been subtly stained a vintage yellow, and the rosewood fingerboard demonstrates a distinctly modern 320mm (12.6-inches) radius: compare that to the 184mm (7.25-inches) radius of a '52 Telecaster, for example.

The Gibson P-90 remains an underrated and misunderstood single-coil pickup - it can cover an impressive number of tonal bases. Blade's LP-92 is hotter than, for example, Seymour Duncan's humbucker-sized Phat Cat P-90 and does add a musical abrasion to amps set to break-up point. Hatstatt describes the guitar's basic performance as the perfect mix of a Les Paul Junior and the twang of a Tele and, for the most part, he's spot on.

The central position is closest in tone to Fender's classic single-cut, although the brittle edge is backed up by fuller mids. Consider the imaginary 'two-and-a-half' position of a Strat's five-way lever and you'll be in the ballpark: it's a unique tone, which is a real plus point in toady's market.

From the P-90's beautifully smooth classic rock rhythm tones all the way through to the neck pickup's glassy clean options, the Dayton is a truly versatile guitar and, what's more, it plays beautifully.

Blade has always been at the forefront of guitar innovation and if you've found yourself on the cusp of taking a punt with one, try the Dayton Standard on for size. It's close enough in feel and vibe to both a Strat and Tele without ever stepping on the toes of either, and it also offers its fair share of Kalamazoo flavour in the package. The competitive price of this version further makes it a serious contender.

Listen to our audio demos to hear a few examples of the Dayton Standard's sounds:

Both together - fairly clean

Both together - fairly dirty