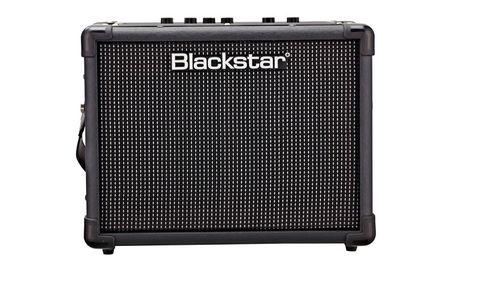 A superbly featured first amp - a no-brainer. A lot of fun for the cash!

Yet another new addition to Blackstar's continually expanding catalogue, the ID:Core Stereo 10 is a small combo that looks set to change people's perception of what a first amp, or practice amp, can and should do.

At a price that places it within reach of even cash-strapped players, the Core uses a stripped-down version of Blackstar's ID: preamp combined with an external power supply, plus a smart-looking cabinet with an integral carry strap. Most importantly, behind the grille cloth, there are two three-inch, five-watt loudspeakers hooked up to a stereo output stage.

The Core is also programmable, with one patch per voice setting capable of being saved on the amp, but more if use Blackstar's Insider software, via the USB socket. There's a tap-tempo button for manually setting delay times and a manual mode button, which takes the Core into 'what you see is what you get' mode.

It's crazy how the onward march of technology has taken what were once high-end studio-only techniques, recreated them in the digital domain and brought them down to a level that anyone can use and have fun using with a minimum of knowledge. Beginners will never again be able to blame their amp for sounding bad.