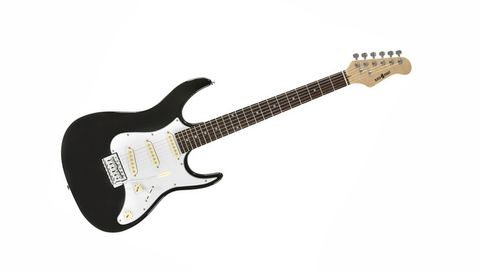 A Strat-o-like with a twist, the Black Knight has decent sounds and enough individuality to make it a real contender in the budget market.

The lower rungs of the guitar market used to be home to landfill-ready tat-o-casters and other wonky clones of famous designs. These days, it's becoming a lot easier to find credible instruments for around £100.

The Black Knight CST-10 clearly aspires to be such a guitar. Clad in glossy ivory paint, the 'Knight takes obvious styling cues from Fender's ageless Stratocaster, but its dinky body, deep cutaways and chamfered heel add just a hint of shredder's delight to the mix, too. At a dainty 3.25kg (7lbs) in weight, it's comfortable to strap on - any lighter and it would feel a bit insubstantial. Things get heavier when you plug in, however.

Sonically, the Black Knight is surprisingly pleasant. The pickups are focused and clear and although not the chunkiest we've heard, they're better than they have a right to be at this price. A predictable buffet of single-coil tones is on tap, with a slight emphasis on crisp, modern, clean tones rather than classic twang. Step on a distortion pedal and the 'Knight will also wail nicely, with no vicious tendency to feedback at the drop of a hi-hat.

The bridge pickup yields a usefully incisive lead tone, while the neck pickup is sweet and mellow, though not particularly detailed when driven. The neck-and-middle setting stands up to dirt better - it's spanky, hollow, and supple.

Although upgrading the pickups would probably improve matters further, when you reflect that a quality set of after-market 'pups' might cost more than this whole guitar, it hits home what a lot you're getting for your money already. A single tone control covers all the pickups, including the bridge, unlike the arrangement you'd find on a Fender. Given that this Knight isn't too stuck in the past, it's a sensible update.

Bad points are relatively few, but the budget construction shows here and there. The slot for the five-position pickup selector is cut very raggedly, and while the fret ends are not horrible, they are a little industrial-feeling under the fingers.

The overall build quality is good, but the major brands are also producing better and better guitars at this price point - so the 'Knight really has to sell itself on unique features and cut-above usability. Being 'off-brand', it can afford to make a statement by departing, in small but significant ways, from the classic templates of 50s and 60s designs. The single-piece neck's comfortable, slightly flattened C-profile is a great starting point, and as a result feels a lot more expensive than it really is. The flat-radius board also reinforces the modern, widdle-friendly persona of the guitar - and that's a good thing as it gives the Knight a personality and a purpose beyond simply being just another three-pickup, budget doublecut.

Set up as it is with the bridge flat against the body, permitting downward tremolo movements only, the Knight holds its tuning pretty well provided you don't go postal with the whammy bar. Straight out of the box, the action is on the high side of average, but perfectly useable. If this Knight were ours, we'd go up a string size to give the tone some extra cojones and lightly tweak the setup to perfect the intonation and optimise neck relief at the same time.

Okay, so nobody's going to crawl over a pile of Custom Shop rarities to get to the Black Knight. It does, however, perform an important role very well: it's a dirt-cheap guitar with few vices and credible tones - and thus stands a way better chance of keeping a newcomer playing than many cheap and nasty, unserviceable rivals at the same rock-bottom price. Amen to that.