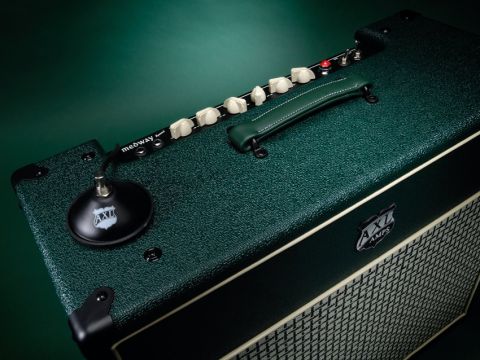 An unfamiliar brand, but one that taps into a rich vein of tonal heritage for not that much money. Definitely one to try out!

AXL is one of China's largest manufacturers with around 18 factories. Rolling off the production line is a huge range of instruments including AXL and Radio King guitars, strings, wind instruments and pianos.

Although the sheer range of AXL products might leave you a little confused in terms of brand identity, the Medway Special's cosmetics leave you in no doubt as to its inspiration.

The smart, British racing green take on a mini Bluesbreaker has a distinctly boutique vibe that might fool casual observers into thinking that the asking price might be considerably more than it is.

Under the hood, power comes courtesy of a pair of EL84 valves, while a pair of 12AX7/ ECC83 preamp valves is augmented by a solid-state boost circuit powered by a TL072 JFET op-amp and adjusted by the Medway Special's gain control.

The onboard 12-inch driver is a Celestion G12M Greenback; again, we're in classic Brit-rock and blues territory here.

Despite the amp only having a single top-mounted handle, the 18mm birch-ply cabinet is surprisingly light and easy to transport. In addition, the combination of generous physical proportions and a partial open back should do much to alleviate any of the potential boxiness inherent in many a 1 x 12 combo design.

There are no real surprises, but it's nice to see such inherently retro stylings combined with sensible features such as a parallel effects loop and footswitchable reverb. In these days of high quality PA systems, for many players an 18-watt 1 x 12 combo is a realistic gigging option too.

Hear the Medway Special in the following clips. Example one, with the gain set to three and a Fender Stratocaster:

Example two, with the gain set to three again and a humbucker-loaded Ibanez AR250:

As the amplifier's cosmetics scream 'late sixties Marshall', our first six-string port of call is a Gibson ES-335. With enough level to get the power valves cooking and some extra kick from the preamp, it's easy to find the classic rock ballpark.

Indeed, Cream-era Clapton, Zeppelin and AC/DC-style grind are well served, with a mid-rich drive ringing out with authority. As expected, the EL84s bring a little more compression and chime to the equation. Chest-thumping low-end isn't really on the menu, but that's what EL34s and 4 x 12 cabinets are for.

Rolling up the gain brings a surprising amount of dirt to the table, but things can get a little too fizzy and flappy in the highest reaches of the control's range - a PAF-style humbucker brings the best overdrive voices at around two or three o' clock.

At stage volume, these sounds clean up perfectly well with the guitar's volume control. At the cleaner end of the spectrum, there's a definite sixties feel to the Medway Special's tonality and there's chime and jangle in spades.

Switching in the onboard reverb, it's possible to get a passable Peter Green lead sound, although the reverb is functional rather than sumptuous. That said, in an amp of this style its mere presence is a bonus.

AXL might not be the first brand that springs to mind when shopping for a low-powered valve combo, but at this price the Medway Special comes recommended.

Sure, it's neither as tonally compelling nor dynamic (nor expensive) as Marshall's much-loved 1974X, but it does have more gain and a master volume: two things that will swing it for many. A good choice for sixties pop, blues and classic rock. And it looks great too.