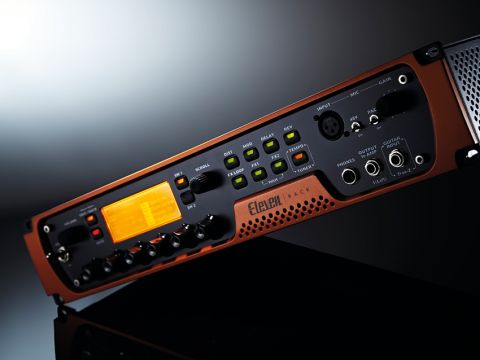 All you'll need to record guitar and more on your computer

We first looked at the Eleven Rack back in 2009, but there have been changes since then to warrant us taking another peek, notably the introduction of an expansion pack.

This latest Pro Tools + Eleven Rack is aimed squarely at guitarists - bundling the Eleven Rack with that Eleven Rack Expansion Pack and a full version of Pro Tools 10, the very latest incarnation of the industry standard recording software.

Effectively an audio and MIDI interface with guitar amp and effects processing built right into it, the Eleven Rack can be used as the nerve centre of a Pro Tools recording system (or any other recording software) using a USB connection to computer and can be used for recording guitar, mic or line-level signals. It can also be used to re-amp previously recorded work.

As a standalone unit the Eleven Rack is equipped with a whole range of outputs for routing its onboard sounds to recording equipment, a mixing desk, PA or amplifier.

While most connections are neatly tucked away round the back, the guitar input, mic input and headphone output are right where you need them on the front panel, alongside an output that you use to hook up an amp. The front panel is neatly laid out in logical sections and the clear display has various modes that you can select depending on what you need it to show, including a large readout of the number of the currently selected rig that can be easily read across a darkened stage.

The sounds are arranged in programs known as 'rigs' - 208 in all, half factory presets, half user-programmable. Each is created from a chain that includes amp, cab and several effects blocks - volume, wah, distortion, modulation, reverb, delay, FX1 and FX2.

The active effect in each block can be chosen from a variety of models including emulations of genre classics - Big Muff, Echoplex and so on. The order of the elements in the signal chain is very flexible and there's also an FX loop so that you can physically insert your own hardware pedals into the chain.

Editing of the rigs is swiftly carried out by an array of six soft knobs below the display. In the first instance these are assigned to the selected amp's controls for quick sound tweaks but individual effects blocks can be called up for editing by pressing and holding the switches on the right of the front panel, which can also turn each effect on and off for the selected rig.

All of this is pretty straightforward but, with Pro Tools running, you also get an onscreen graphical editor with drag and drop functions that make the process quicker.

Playing through the unit offers plenty of the dynamic push and pull responsiveness you'd expect from a real amp, thanks to the quality of the modelling, but also the True-Z input circuitry, which can change the input's impedance to match how it would be if plugging into a real amp or effect.

The amp models don't include a huge number of different makes but what's there covers a very wide range of tones. The original Eleven Rack had amps from Fender, Marshall, Vox, Mesa/Boogie and Soldano. The expansion pack adds more Fenders and Marshalls, gives you a nice array of Avid's own custom amps, plus Matchless and Bogner models, and an Ampeg SVT for bassists.

The tonal range has been further expanded by the eight new cabinets (including an Ampeg 8 x 10, a Fender Champ's eight-incher and the 2 x 12 array from a Roland JC-120), plus there are two more virtual mics (both dynamics that are great for capturing the bottom end) and five new effects.

For performance you get a front-panel tap tempo button and various possibilities for remote switching and parameter control, although there's only one input so you can either plug in an expression pedal or a dual footswitch. However, if you wish to make the most of the unit on stage add a MIDI foot controller and you'll be spoilt for choice with switching options.

As an audio interface, the Eleven Rack has a decent mic preamp built in and is capable of recording up to eight simultaneous channels of audio, although for recording guitar you'd perhaps only really be interested in recording two tracks to your DAW - the Eleven Rack outputs a mono dry guitar track simultaneously with a stereo track complete with all of the onboard processing.

This gives plenty of scope later should you wish to change the sound during mixing, because the dry track can be sent back to the Eleven Rack and re-recorded with a different sound. If you use Pro Tools as your DAW there is a nice practical tie-up with the Eleven Rack in that you can embed the Eleven's current Rig settings into a Pro Tools audio region as you record them.

The settings can be re-loaded back into the Eleven Rack directly from Pro Tools - extremely useful if you need to re-record some of a guitar part at a later date or just want to exactly duplicate the sound.

There's not the space here to give a full review of the capabilities of the Pro Tools 10 software itself but it will put the means at your disposal to compose, record, edit, and mix your music. As well as audio recording you get a set of virtual instruments and many tools to manipulate sound including the ability to adjust pitch and time on the fly with elastic pitch and elastic time.

Such a tidy range of amp and effects in a rackmount unit with multiple outputs and a computer connection makes the Eleven Rack an ideal studio tool for anyone who records guitar regularly and needs a wide range of tones, but it easily adapts to stage use so that you can link it up to a power amp and have your exact recorded tones on stage.