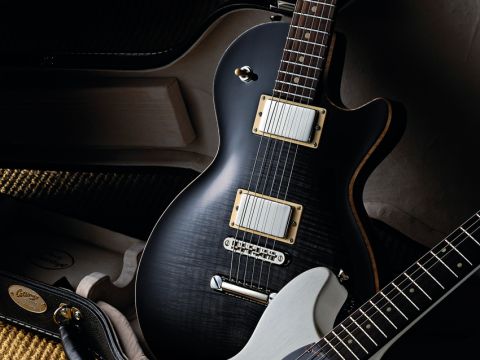 A masterful Tom Anderson guitar that looks like a single-cut, but sounds like a whole collection of guitars.

Whatever happened to original guitar design?" is a question many of us might ask while admitting that despite the merits of new Technocasters, frankly, we'd prefer a good ol' Tele, Strat or Les Paul.

Tom Anderson - one of the world's best guitar makers - has never chosen to be hugely original. If you look back at Anderson's designs, the major influence - Fender - is obvious. The Bulldog, however, changes the start-point to Gibson.

It's not what any sane person would call cheap, but what exactly does this guitar bring to the table?

Tom Anderson takes a fairly modern slant on the Les Paul. The outline is different from the Gibson classic: the treble horn is smaller, more rounded, the flanks below the waist are trimmer and the bottom curve a little flatter.

Overall depth is thinner too at 57mm, and the generous back edge radiusing, which is increases to almost a cutaway in the waist, adds subtle comfort in a seated playing position.

The key constructional difference is in the two-bolt neck joint. First seen on the also single-cutaway Atom, the 'A-Wedgie' joint uses a tapered side, flat-bottomed shape at the point on the neck where it fits into the body.

The body mortise is cut in a matching manner and the two bolts pull these two parts firmly together, giving no place for either to slip or slide.

There's no neckplate and the two bolts sit in recessed washers and thread into metal inserts in the neck itself. At this point on the body, a typical Les Paul is square-edged and angular, but on the Bulldog it's tapered away.

There's only a very small heel - literally the start of the transition from the rounded neck back to that wedge-shaped joint.

The satin-finished neck back again has a full 'C' section - approx 21mm at the first fret and 23mm at the 12th. The nut width is virtually identical, the bridge spacing very slightly narrower, but with a conical fingerboard radius it feels more modern; likewise the stainless frets (approx 2.6mm wide x 1.4mm high) feel taller.

That said, the finely rounded fret ends and more rounded 'board edges give a lovely worn-in old feel. The scale length is slightly shorter here, the set-up slightly lighter with 0.010s.

In keeping with the bolt-on style, the quite retro headstock is like a three-a-side Fender, including a similar open hole for the truss rod access just behind the well cut nut.

The tuners taper into the headstock, which results in near straight string pull over the nut, unlike the usual splay of a Gibson-style head.

The potential lack of string angle behind the nut is compensated for by the vintage-looking Gotoh tuners, which are not only locking, but height adjustable too.

The impression of reduced bulk in the playing position is further enhanced by a less extreme neck-to-body pitch, achieved by recessing the Tone Pros bridge and tailpiece - likewise the pickup rings - into the top.

The plain covered pickups are from Anderson stock and controls are Les Paul-like save for the pull/push switches on each tone control, which turn the relevant pickup into 'single-coil' mode (which is hum-free and sounds more like parallel humbucking to us).

Typically we have a capacitor and resistor network on each volume control to retain the highs as it's rolled down.

There's plenty of bright-edged zing to the Bulldog's unplugged tone, and that translates to its amp'd voice. Neither humbucker is over-powered, and there's a pretty hot vintage- like output, which adds to the clean, almost pristine character.

It sits midway between a good Telecaster and a modern Les Paul. There is, however, a little of the often bright-edged old PAF to the sound here, yet with that steely character it has something of a good Les Paul Deluxe about it too.

Both volumes clean up nicely, tightening the bass a little and giving a little more 'single-coil' breath; the tone taper is excellent too and those 'single-coil' mode switches heap on the versatility.

There's effortless ring and sustain and hosts of clean Fender-esque tones - even a little Gretsch and Ricky with the tone rolled off.

But add in some crunch and light gain, wind the controls fully up and in humbucker mode and this is definitely a nicely chewy, big single-cut tone albeit with its own character - again that Deluxe-like tonality springs to mind. There's certainly less 'wood' to the sound compared to a PRS Singlecut.

With heavier gains there's plenty of cut-through, yet it's never harsh, brittle or ear-wearing - it's a little more modern sounding.

However, the more we play it the more its own character - or should that be characters? - emerges and the more sounds you hear.

Those 'single-coil' voices, not to mention the more subtle tonal changes from the volume and tone, make this a single-cut you don't have to put down for the country, pop, or indie tunes in your set. This musical versatility is typical of Anderson.

Styles aside, though, that awesome Anderson playability is what makes us come back for more.

Once you've played a great guitar it's hard to go back, and that's the issue here. We know we don't actually need guitars that are as great as this instrument to make great music, but that doesn't stop us dreaming. Why wouldn't you want the best?

Yet as financial times are getting tougher for the vast majority of us, you have to ask what place guitars in this price bracket hold in the real world?

They will certainly hold their value compared to a more everyday instrument, but condition remains everything should you want to sell. We'd just want to throw it in the van and play the hell out of it: goodbye resale value.

There's so much of that famous Anderson versatility in there that pigeonholing it as 'just a single-cut' is severely missing the point.

Okay, put it another way. This is one of the finest guitars money can buy. If you've got the cash, enjoy it, but please, please play it - expensive it may be, but it deserves to be heard.