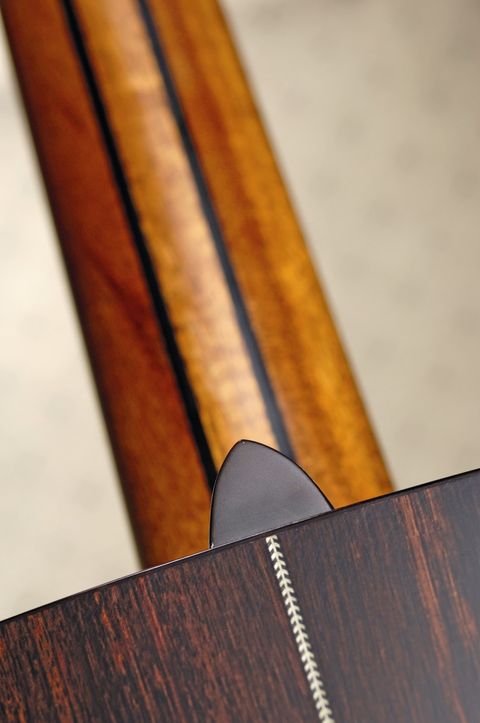 Alvarez acoustics command major respect among those who have been lucky enough to play one of the Chinese-made guitars. In the past, that's been a frustratingly small number.

Since the brand was introduced way back in 1967 by St Louis Music (one-time owners of Crate and Ampeg) these high-end, Alvarez models have bypassed the European market and landed straight in the hands of the Americans.

Players of such reknown as Warren Haynes, Pete Yorn, Dave Mason, Crosby and Nash, Bob Weir and Ani DiFranco - have consistently praised their quality and price ever since.

In 2005 Loud Technologies acquired the brand and began shipping to the UK in 2007. The Alvarez Masterworks MD350 dreadnought arrives lead the charge.

The Masterworks Series was launched in 2001 to represent the pinnacle of the Alvarez range and came with an aspirational price tag to show it.

The £999 MD350 has outstrips the price of your average Chinese acoustic, but it also has a spec sheet that justifies it with some conviction.

The major selling point of this dreadnought is it's all-solid timber - a tidy Engelmann spruce soundboard with an Indian rosewood body.

It's braced with a double X and bound together with tortoiseshell and herringbone that also dissects the back.

While the overall visual impression is a little generic, it's worth noting that wood coloration can be different between specific MD350s, which underlines the organic vibe.

The neck is a five-piece lamination, with strips of ebony breaking up the mahogany and a well-executed dovetail consolidating the rugged feel.

The nut and compensated saddles are bone (although the gluing of the former could have been a bit neater).

Ebony is a bit of a theme, appearing again at the handlebar moustache of a bridge and as the basis of an impressive fingerboard with well-dressed frets and an pearloid oval at the octave.

While Alvarez isn't shy about cosmetics, the trimmings here are functional, with gold Grovers holding convincing pitch on an elegant headstock and the soundhole rosette making a non-committal statement.

Alvarez ships the MD350 with an optional pickguard - we think it looks better without, but it's your call.

There's a lot to enjoy about the MD350 when playing.

It offers a 44.5mm (1.75-inch) nut width, a 650mm scale length and a wider bridge string spacing than some at 60mm - and this adds up to an instrument that we feel excels at busy fingerstyle.

The neck profile is on the large side, but this bolsters the tone and gives a satisfying canvass for all sorts of styles; besides which, the run of the 'board is sufficiently smooth to ensure that fretting and moving barres is never hard work.

A real bruiser in both size and performance - advocates of the dreadnought format should find a date with the MD350 a more than satisfying encounter.

The MD350 is available in a piezo-equipped cutaway format (the MD350C, at £1,049) and given the small financial leap, it's worthy of consideration.

At the same time, there's no doubt that the vanilla version has the power to pull off intimate performance and the tone to make it viable for the studio.

As well as the inevitable punch courtesy of the generous body dimensions, there's genuine class at every level of the spectrum.

This is supported by an uncluttered-but-full mid and a brightness at the top end that means this model excels at everything from rolling boogie blues to country-style picking.

Even basic chords hit with a pick have a tight shimmer of class - testament to the quality materials in the build.

The MD350 is a welcome introduction to Alvarez for UK players who are looking for something unusual.

The market is hardly starved of quality, solid wood dreadnoughts, but beneath the generic appearance there's a catalogue of well-executed features and a commanding tone.

It's yet another example that China doesn't just produce cheap-as-chips starter guitars.

As Guild and Epiphone and this Alvarez undoubtedly confirms, there are some well-priced serious guitars coming from China.

We're not sure if it's a 'masterwork' but there's always room for quality such as this.