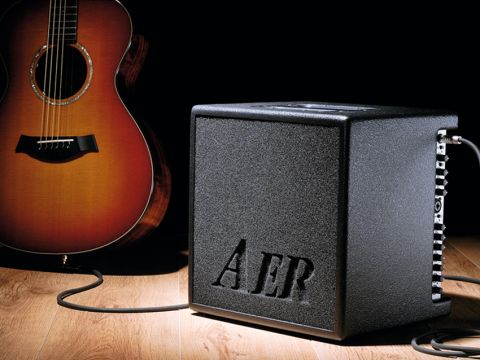 A supercharged Compact 60, the XL ensures you'll be heard - clearly.

AER's Compact 60 has pretty much written the rulebook when it comes to portable acoustic amplification. If you're serious about your gigs, you probably have one, or have at least thought about investing.

But take the 60-watt Compact 60 to a bigger gig where your drummer swaps brushes for sticks and you might be in trouble. Enter, then, the Compact XL - effectively a 200W version, but only marginally bigger and heavier.

Housed in black splatter-finished 15mm birch ply cabinet, the XL is the same width as the 60, 60mm taller, 50mm deeper and 3kg (6.65lb) heavier. It comes, therefore, in a slightly bigger padded carry bag - it's still compact, but is a heavier and chunkier proposition if you're carrying it to a gig.

The large carry handle is now placed on the side, with four large feet both opposite it and on the base, giving you placement versatility. That means the control strip, cited on the back edge, can either be vertical or horizontal.

The control layout is identical to the Compact 60: dual channels, with input one being the instrument channel and sporting a single standard jack input, high/low sensitivity switch, gain with clip LED, colour preset (a low-mid cut/treble boost) and bass, mid and treble EQ.

Input two has a jack/XLR combi socket, line/mic switch and the same controls, except for the colour preset and mid-range rotary. The effects section controls (pan, select and level) are the same too, although here we get two reverbs (small and large) and two preset delays (240 and 330 msec) and, finally, master level.

Rear panel features are comprehensive, but the main difference lies in the uprated fan-cooled power section and the presences of a twin speaker. The idea? Considerably more clean headroom.

Yup, it's pretty pokey alright! There really does seem to be a lot of power on tap here. It's a big, bold sound too from such a small box. But the overall sound quality is typical of an AER unit: clean, clear and that's with EQ options set pretty flat.

That colour preset is instant new-string modern acoustic sound, which may be a little too hi-fi for those of us chasing a more natural old-school tone, but generally the EQ produces highly musical results.

The massively increased volume and headroom before any noticeable limiting affects the sound is what's key to the appeal here. As well as giving you more than enough power to compete when playing in bigger venues, you also know you're not going to run out of steam at smaller ones.

With so much in the amplified acoustic world, you buy something only to find that once you get it out on the road, something is lacking.

Thankfully, AER's hard-earned reputation - which costs, of course - means that you can buy with confidence. It's really not surprising that these amps are so well used, especially by working musicians.

So, the Compact XL simply adds a turbo-charge in the power stakes to the best-selling Compact 60. It adds a little bulk and weight - and substantial cost - but the key to amp'd acoustic playing is being prepared: no gig ever seems the same, and the XL just keeps giving you clean power after the 60 reaches its limit. If you need it, the XL has it.