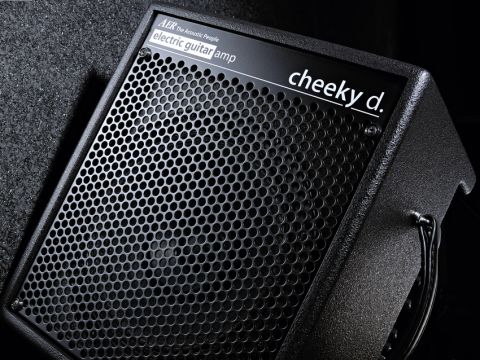 A top-quality, high-spec, small combo that takes a unique route to electric and acoustic tones. Jack of both trades…

Audio Electric Research has become known for its innovative acoustic guitar and bass solutions, cramming a host of features into small, portable boxes that sound much bigger than they are due to clever cabinet and loudspeaker design.

For many guitarists who perform as solo artists or accompanists, AER's 'all-in-one-box' designs have proved to be a godsend, with the company's original AcoustiCube design now in its third generation and the recipient of numerous awards.

Recently, AER has stepped outside its comfort zone with the introduction of an amp designed for electric guitar, the interestingly named Cheeky D. How well has AER adapted its successful acoustic design concept to the altogether different needs of the electric player? Let's take a look…

AER's cabinet design is quite different to what we've come to accept as traditional for an electric guitar amp; the speaker is front-mounted into a small cube-shaped reflex enclosure with a narrow slotted port exiting at the bottom rear.

It's this port that's responsible - along with AER's proprietary loudspeakers - for providing extended tonal range from such a small enclosure. The joinery is, as you would expect, extremely neat, with the whole cabinet covered in a blackspatter finish paint that's proved to be at least as hardwearing as vinyl.

The electronics are held on an 'L'-shaped steel chassis, which forms the top control panel and the large rear panel. There are three large high quality circuit boards that hold the preamp, rear panel and power supply electronics, including the single 12AX7 preamplifier valve, which looks a little incongruous surrounded by hundreds of sub-miniature surface-mount components.

Although surface-mount technology generally results in more robust products, it's more difficult to diagnose and service.

Most AER amps feature fairly complex control arrangements that require a good read of the manual and the Cheeky D is no exception. We have two input channels, fed by separate jack sockets. Channel 1 is solid state; Channel 2 is valve.

If you have one instrument plugged into Channel 1, it can be footswitched between both channels; however, you can also have two instruments plugged in simultaneously, in which case the footswitch acts as an A/B changer.

Both channels have gain controls with attendant clip indicators, used when setting up the amp for optimum signal levels. There's a distortion feature with a level control and an on/off switch that works on both channels, and a separate Channel 2 volume control.

The shared EQ consists of a regular set of bass mid and treble knobs with a button called colour, which scoops out a little bit of the midrange and boosts the high end. Channel 1 also features a self-explanatory dark/bright switch and there's also an overall mute switch.

Next up is the Cheeky D's effects section, which consists of a four-position rotary switch with two reverbs, chorus and delay, with a level control to govern the balance between effect and dry signal. Finally, there's an aux in level control and a global master volume.

The rear panel is home to a comprehensive patch bay, including a fixed line-level output as well as separate jacks for headphones and a tuner. There's a pair of send/returns for the parallel effects loop, two insert jacks (using standard tip send/ring receive wiring, pre and post-EQ) and the aforementioned aux input, which can be used for your mp3 player or an unbalanced mic.

We tested the Cheeky D's electric tones with a Strat, a Custom Shop Nocaster, a PRS McCarty, as well as a Takamine EAN20C.

The control layout and its extended capability means it isn't geared to instant gratification; you really do have to read the manual carefully to understand what this amp can do before you plug in, and even then it takes a lot of tweaking.

Good acoustic tones are easier to come by than electric ones. With the Takamine plugged into Channel 1 and bright switched on we had a good sound in minutes, although for professional use it would need some polish with a decent compressor as well as a graphic or parametric EQ to 'notch out' feedback-prone frequencies.

Earlier Takamine preamps tend to sound a little flat and the valve in Channel 2 adds warmth and roundness that improves the tone no end. There's an excellent woody jazz sound with the treble rolled off and we'd wager the Cheeky D would sound superb with a proper arch-top hollowbody.

Swapping to electric provided good lively clean tones from Channel 2. However, the distortion isn't as responsive as we'd hoped, sounding more like an FET stompbox than a valve.

However, there is plenty of gain and using the amp's onboard reverb it's easy enough to push the Cheeky D into a big solo lead tone, or add chorus for a spacious effect that works well for chords.

With a 200-watt output stage, volume isn't a problem, but projection from this small enclosure isn't brilliant, especially if you have the back of the amp too close to a wall, which limits the rear port's usefulness. We found that the best results come from using the amp's built-in DI plugged into a PA system.

The overall results are good for an acoustic, and although the Cheeky D's electric sounds were perfectly usable, some might feel they're a little flat and uninspiring.

Clearly the Cheeky D isn't a monster rock amp, but not everyone needs that. If you're an acoustic player who needs to be able to swap to a convincing electric sound and back again in seconds with a minimum of fuss, then this amp could be right up your street - it's also light, portable and has enough in the way of capability to replace a lot of outboard gear along with attendant leads, power supplies and so on.

This model, with its twin-cone 10-inch driver, is focused more on providing good acoustic tones; the 240-watt version with a conventional 12-inch Alnico magnet guitar speaker will probably produce more convincing electric guitar sounds at the expense of its acoustic capabilities.

There are plenty of acoustic guitar amps on the market but not many can do electric as well as this, or double as a self-contained PA system that you can carry in one hand.

So we think the Cheeky D, while not cheap, is good value for money. Obviously it isn't aimed at the budget end of the market, but professionals and serious amateurs should take note.