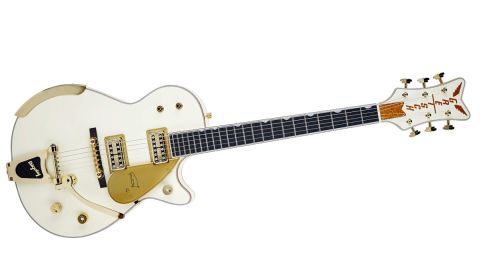 Some might think that the price tag takes the biscuit but we reckon there’s never been a better time to p-p-p-pick up a Penguin.

This penguin shuffles into a pub, sidles up to the bartender and says, “Excuse me... has my dad been in?”

“I dunno,” the barkeep replies. “What does he look like?”

Yeah, it’s funny cos it’s true. Penguins have this tendency to look the same as one another; and that conspicuous sharing of DNA doesn’t only apply to those flightless souls huddled together on the Antarctic ice with an egg jammed between their knees. With its new Vintage Select model, Gretsch has nailed its most accurate reissue of the iconic 50s White Penguin to date.

The Penguin first hatched back in 1954 but, as this latest model’s catalogue number reveals, our vintage white G6134T-58is a doppelgänger for the 1958 edition. Although it was never designated as such, the White Penguin is basically a pimped up version of a Duo Jet, the black-topped model made famous by ‘Savage Young Beatles’ era George Harrison and Gene Vincent & His Blue Caps genius Cliff Gallup.

Befitting its top-of-the-line status, the’58 Penguin comes with a nitrocellulose finish, ebony fingerboard, oodles of gold sparkle binding - with matching back plates and a truss rod cover - plus G-Arrow knobs studded with a little ‘jewel’ and pretty Grover Imperial tuners, too.

The ’58 also documents some key spec changes that occurred to solidbody guitars that year. You’ll find mother-of-pearl neo-classic thumbnail fingerboard inlays on show now but it’s the wiring loom that garnered the most attention.

This was the year that Gretsch switched to its Filter’Tron humbuckers - here replicated with TV Jones Classics. There’s a volume knob for each pickup, plus the master volume near the Penguin’s cutaway. The loom is completed with a three-way pickup switch. The old master tone control is replaced with a pre-set switch with a trio of options.

The ’58 Penguin offers a reassuring amount of grunt. The Filter’Tron humbucker is one of the great rock pickups. It’s the rhythmic backbone of AC/DC, the sound of Beatlemania-era George, Steve Marriott on Small Faces 45s like All Or Nothing, Pete Townshend’s tone on The Who’s mod opera Quadropenia and almost everything Brian Setzer ever recorded.

The TV Jones in the bridge is bright and punchy. It jangles on a clean setting, and thrives with a touch of valve compression. Dish the dirt and you get some of Malcolm Young’s immortal rhythm tone from It’s A Long Way To The Top (If You Wanna Rock ‘N’ Roll).

Thanks to Mr Setzer the FilterTron has become to go-to pup for rockabilly hound dogs despite the fact that original cats like Cliff Gallup, Chet Atkins and Eddie Cochran did the business with Dynasonics. Gretsch has almost become typecast by the rockabilly thing but the truth is that Penguin absolutely kills at that stuff.

Yes, the Penguin is about as subtle as Liberace’s piano but it’s a masterpiece of guitar craft. We love the fact that Gretsch fattened up the Penguin - and the rest of the Vintage Select flock - with a two-inch gut and sprayed it in a vintage white nitrocellulose. We love the TV Jones Classics: a pair of humbuckers don’t tie you to a specific era in quite the same way as the T-Armonds. Short of the heaviest of metal there’s little these pickups can’t handle.