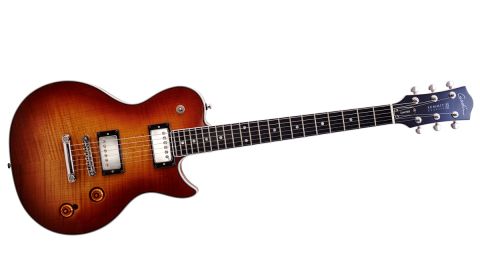 A fine addition to the single-cut market.

Little did Gibson know back in the early 50s that its first solidbody guitar would spawn a whole industry.

For many of us, the Les Paul started in 1958 and was over by the time the restyled ‘SG’ replaced it in 1961. These so-called ’Bursts have fuelled dreams and obsessions, and a considerable number of copies, clones, forgeries and fakes.

But we still can’t get enough, can we? The other side of the single-cut coin is the numerous makers who have taken Gibson’s blueprint and added their own twists, quite often simply to side-step Gibson’s legal department.

Nonetheless, from the early 50s the influence of the Les Paul began to leave its mark even if, as with Guild’s M-75, many borrowed the style but made it hollow or semi-hollow.

In more contemporary times, like the Stratocaster, the Les Paul has been the inspiration for many an electric from PRS’s Singlecut, to Patrick James Eggle’s Macon Single Cut… and many more.

Canadian maker Godin Summit Classic Ltd’s single-cut vision is a contemporary take. Firstly, the outline of the two-piece centre-jointed top is noticeably redrawn from the original: that slight cut-out on the bass-side shoulder, a more open, out-curving tip to the cutaway’s horn and a flatter curve to the base of the body.

Its depth retains the bulk of the original: 47mm at the rim rising to around 57mm in the centre of the carved maple top. Unlike a Les Paul, there’s a slight rib-cage chamfer on the back. The top exhibits quite a classic appearance, with its not overdone down-turned flame under the caramel brown-coloured light ’burst. The top’s carve is nicely dished; both volume and tone are inset, PRS-style. It’s a very clean job.

Joining the neck at the 16th fret, like the original, neither the neck pitch nor headstock rake are quite as extreme as a vintage spec Les Paul, but it’s doubtful (or certainly debatable) that either are noticeably detrimental to the sound.

The neck, with its modern dual-action truss rod, has a spliced headstock and a nicely old-school three-a-side, quite thin-widthed head with its single domed-top lip: it looks like something we’ve seen before, even if the central Summit Classic and Made In Canada legends are far from vintage.

The ‘Limited’ truss rod cover differentiates it from the non-custom shop models, too. Along with that bright white binding we have what appears to be mother-of-pearl dot inlays - hardly correct for the classic Standard or Custom style, but a nice working guitar touch.

There are more than a few twists, however, that take this Summit Classic recipe away from its inspiration. Firstly, there’s the centre-jointed two-piece mahogany chambered body, with “five hollow chambers strategically placed throughout the guitar’s body”, says Godin. “Each is tap-tuned to a different pitch ensuring rich, musical tones and extremely consistent note-to-note balance.”

Then there’s the use of Richlite for the fingerboard instead of rosewood or ebony - a material that Godin employs on other higher-end guitars.

More modernism appears in the electronics spec where - despite the pretty old-school style of the Bare Knuckle Mules - we have the active High-Definition Revoicer (HDR) that’s engaged via a small push-button discreetly placed in front of the lower tone control and designed to “revoice and augment the frequency range of each pickup and allows the player to go from passive to active pickups with the simple push of a button”.

While the drive remains simplistic with a shoulder-placed three-way toggle, controls are condensed with just master volume and tone. The output jack is the recessed circular Tele-type and the bridge is Graph Tech ResoMax design; Graph Tech also supplies the Tusq nut. The airy unshielded control cavity also houses the nine-volt block battery for the active circuit.

The pots and HDR circuit and its switch are all mounted to a central PCB, which could make modding a little difficult.

The Godin will surprise many players with a voice that manages clarity, sweetness and power with that simple two-control drive. It has a lively resonance, too, married with a lighter weight.

The HDR not only adds clarity (in a musical fashion), but just a very subtle level boost. It cleans up the passive treble roll-off effect when the volume is reduced, and if you just need a little more zing, especially with a more-complex pedalboard setup, it’s here.

It doesn’t quite manage the lower-mid thunk of, for instance, an Eastman SB59/v and there’s a very subtle compression - which, depending on your style, could be good or bad. There’s a lot of single-cut sound here with a very simple drive, which could prove a winner if you have more sounds to cover.

Godin has cheaper alternatives, but its single-cut vision in this ‘Ltd’ incarnation is top drawer, bringing something different to the table with its chambered construction, light weight, Richlite fingerboard, active HDR circuit and streamlined controls.

As to value, that’s always a difficult one. We have to conclude that the Godin does seem a little over-priced, especially when compared with its standard Summit Classic models (or the price of Gibson’s 2017 Les Paul Standard T, streeting around £1.9k). Even so, this is a seriously good single-cut.