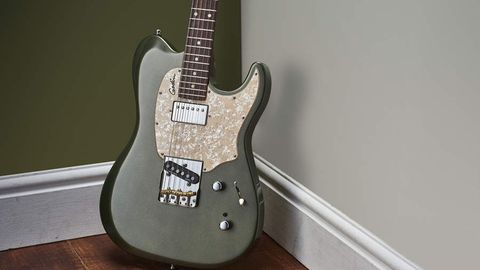 Very little not to like here, especially the price which includes a good gigbag. Plug one in as soon as you can.

Thirdly, the Stadium range features the more Tele-style hardtail models and the Passion versions which add a vibrato.

It’s from this latter range that the Stadium ’59 hails in a new, subtly metallic gloss Desert Green and Vintage Burst Flame  - both with either maple or rosewood fingerboards - plus there’s also a Coral Blue version with rosewood-only fingerboard. While the Burst and Blue have a standard natural finish maple neck, this Desert Green version with rosewood fingerboard also gets a “unique dark shadow finish” to the maple giving it a more mahogany/ dark-roasted colour. The net result is an altogether more boutique-like vibe with clay dot position markers, dark pearloid scratchplate, the semi-walled T-style bridge with its trio of Wilkinson brass saddles, which can be angled and locked in place to optimise intonation.

That said, there are still a few Godin-isms: never content with just a headstock logo we get others on that scratchplate, the bridge single coil - which also bears the pickup name, Cajun Custom - engraved into the chromed neckplate, and six on the back of the small bodied responsive tuners. The headstock and neckplate also tell us the guitar is ‘hand-crafted’ in Canada. Yes, we get it. It’s a Godin, made in Canada.

So if it doesn’t quite out-boutique the numerous small shop makers out there there’s plenty to enjoy. First off, the Canadian Laurentien basswood (also known as lime and linden) body ensures a good weight of 3.1kg/6.8lbs and is lightly chamfered on the bass-side edges, the rear having a rib-cage cutaway too. The heel has a rounded nose, matched by the neck plate which all makes for a subtly evolved version of its inspiration, the Telecaster.

Yes, we have that thru-strung Tele-style bridge and angled single coil but the neck pickup is a covered Seymour Duncan ’59 humbucker. The pickups are controlled by master volume and tone (with Tele-like knurled metal knobs) and a five-way lever switch instead of the expected three. Plus, in front of the tone is a small black push switch for the Godin active High-Definition Revoicer (HDR) circuit. Incidentally, with the switch out the guitar is entirely passive.

Along with that colour the neck feels very smart. The nut width (42.46mm) is conventional enough while the depth of 20.8mm at the 1st fret and 22.8mm at the 12th puts it just under, for example, Suhr specs. Shape-wise, it’s a shallow C but along with a 305mm (12-inch) camber, medium gauge frets (approximately 2.39mm x 1.2mm, the same width as Fender’s American Professional) and a nicely rounded edge to the ’board it’s a very good modern player.

It’s the width of sound here that initially feels rather dizzying. There’s no shortage of crisp highs from the bridge with its over-sized (6.4mm) rod magnets although you can tame those, to some degree, with the tone control creating a little more ‘throat’ to the sound. It’s in stark contrast to the bigger sounding neck humbucker voice, which is slightly louder too, although it sounds a little clouded especially with its very vintage-y 7.28 kohms DCR. The series mix, however, retains the girth but adds a little high-end chime while the humbucker/ single coil parallel mix thins things out a little for a bigger Tele-like mix and the single-coil parallel mix is more what we’d expect from a Tele. The HDR adds a slight level boost (which has a bit of midrange thickness to it as well) and certainly adds a little hair to our clean Vox voice.

But, as is so often the case, the key is to use those volume and tone controls. Engage the HDR, for example, and pull back the volume, and the slight revoicing adds a little strength to the thinner mixes. While with the bridge single coil, pull up the volume, pull back the tone, but keep the HDR in, and there’s a good vocal and fruity midrange to really kick out lead lines. Just remember, yes, this is a pretty brightly voiced guitar at one extreme but use those controls and it’s an awful lot more besides. About the only thing we missed was a coil split for that neck humbucker.

This is a classy guitar, no question. Nicely made with a considered, updated Telecaster-style design it piles on the sound options with expanded wiring and that extremely useful active circuit - the sort of thing you’d find on a Music Man for considerably more money. It’s perhaps a shame that the volume, tone and preamp are all on a PCB as many of us might like  to add more boutique-y components and tone cap values are important here to eke the best from this wide-sounding Tele-to-Paul platform. Very little not to like here, especially the price which includes a good gigbag. Plug one in as soon as you can.