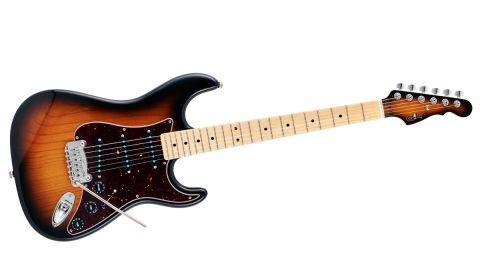 The kind of Legacy that no player would mind inheriting.

Build a better mousetrap and the world will beat a path to your door, the saying goes.

In guitar terms, building the MkII mousetrap was precisely the job that Leo Fender set himself when he founded G&L in 1979. The father of the Strat and the Tele decided that, despite their obvious popularity, he could refine certain aspects of his early masterpieces - and maybe build them a little better, too, given that Fender (which he’d sold to CBS in 1965) was deep in the doldrums at that point.

Fast forward to the present and G&L is still very much a going concern, still offering an alternative take on Leo’s earlier designs. The guitar we’ve got in front of us this issue is a G&L Legacy, a classic double-cut built in Fullerton, California at G&L’s de facto Custom Shop, though more affordable Tribute Series models are built in Indonesia.

The interesting thing about G&L guitars is that at first all you see are the similarities to Fender instruments - then your eye gradually takes in the subtle differences, one by one.

There’s that slender ‘have we met somewhere before?’ headstock, like a cross between a Tele and a Strat, with its oddly attractive little notch. There’s that Dual-Fulcrum vibrato, a little chunkier than a traditional unit, pivoting on two purposeful-looking posts rather than six screws.

The overall feel is similar to that of Suhr’s Classic Pro, which takes a traditional template and finesses it throughout. While the Legacy may not have quite the same boutique cachet as a Suhr it has the same refined and subtly progressive, contemporary vibe.

Strapping on the Legacy reveals it to be neither leaden nor feathery - and the scales confirm that, with the guitar weighing in at just shy of 8lbs. All good.

The body is two-piece alder with a neat centre join and a deep, two-tone burst that actually looks slightly Les Paul Junior-like in the flesh. The ‘Gloss Vintage Tint’ finish is glowing, mirror-flat and feels as box-fresh as a new pair of trainers, which may put some retro-centric players off but is perfectly executed.

The 22-fret maple neck is also rather modern in feel. The neck profile is a fast but fullsome C-shape and those girthy medium-jumbo frets feel like silver ingots under your fingers at first, especially if you’re coming straight from a vintage-spec Fender. Nonetheless, the frets are dressed and seated beautifully, easing you over any bumps in the road.

The neck has a fast, positive feel in play with no fretting out anywhere upon its flattish 12-inch radius. We played Jimi solos on it all night and not even his wildest excursions made the G&L choke up. There’s also no skunk strip on the back of the neck.

This means the fretboard is a cap of hard-rock maple glued onto a neck of the same material once the truss rod has been installed. We like the tidy look it gives the back of the neck and the join is only very faintly visible. Eerily, the fretboard is so pale it looks pearloid in some lights.

Plugging in, the CLF-100 Alnico V pickups give the Legacy a voice that is clear, well-defined and harmonically rich, if a little less sweet and supple than that of our our maple neck Fender Jimi Hendrix Strat, used as a reference for this test. They read at 6.1 kilo-ohms DC resistance for the neck, 6k in the middle and 6.9k at the bridge, so it appears that G&L have sensibly given the bridge unit a little more kick.

The G&L’s voice is a shade more contemporary than vintage, we’d say, but there’s one additional tone-trick up the Legacy’s sleeve. The first control knob is a master volume, while the second and third knobs govern G&L’s Passive Treble & Bass System: the easy way to look at it is that the second knob is a normal tone control while the third rolls off bass.

You may be thinking “Why would I want to roll off bass on an S-type?”, but sometimes you might welcome it to cut through a sludgy mix. Intonation is excellent straight out of the box and the G&L-branded tuners hold their ground well. The overall impression is of a poised, capable and player-friendly guitar. It’s like stepping into a new hire car after years of driving a decade-old beater. Everything is broadly familiar but there are useful refinements everywhere you look.

We have to admit, at first glance the Legacy could be ‘just another’ upmarket S-type solidbody but its competence and class creep up on you in a very compelling way. It faces girder-stiff competition from Fender’s American Pro and Elite Strats at this price point but it’s so sorted that you really should audition one if you’re after a contemporary double-cut. It’s the kind of Legacy that no player would mind inheriting.