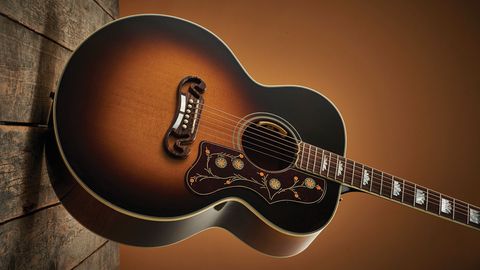 A beautiful instrument but given what else is around, overpriced?

There are some words that have become so overused these days that their meanings are hardly recognisable.

In the guitar world such a word would be iconic, overused by marketeers in an effort to imbue hidden value into some middle of the road retro product… but here, here we have a truly iconic guitar.

Elvis had one with his name inlaid on the fretboard and with a tooled leather cover custom made by his friend Charles Underwood. Dylan clutched one, smiling no less, on his classic 1969 album, Nashville Skyline, and Emmylou Harris, in a similar happy state, sat dwarfed by one that Gram Parsons had given her on the cover of her 1987 album, Angel Band.

So it is with some trepidation that we come to review this, the current incarnation of the SJ 200. In fact if you want to get a good impression of how it sounds? Well Dylan can show you how it strums, Emmylou how it picks, and if you are in need of anger management therapy, listen to Pete Townshend thrashing nine bells out of his one on Pinball Wizard. You might also want to take in George Harrison’s Here Comes the Sun or anything by the Everly Brothers, the list is endless.

It made its first appearance in the 1938 Gibson catalogue, the 200 designation coming from its price tag of $200, a fortune back then. For an extra $50 you could have had your name inlaid in the fretboard. The current catalogue advises us that SJ 200 models remain “reassuringly expensive today”.

Still, let’s move on and open the box as it were. Coming in a black logoed hardcase - which, pleasingly, has just four catches, all topside - our reactions when it’s revealed is “Wow”. Sporting one of the nicest finishes we’ve ever laid eyes upon, described as Vintage Sunburst, it’s a lovely dark tobacco beastie, with classic design accents from the moustache bridge and engraved scratchplate. It absolutely reeks class, and boy is it big!

From the top then. The iconic, (there’s that word again) Gibson headstock sits at an angle of 17 degrees and has added visual definition from the cream binding. The Gibson legend and crown are in mother of pearl and the machine heads are gold-finished Grover Rotomatics with a ratio of 14:1 - nice. The black truss rod cover, again edged in cream, sits atop the Tusq nut, crowning a rosewood fingerboard with rolled edging, inlaid with the iconic (oh we’ve done it again) mother of pearl crown fret markers. Joining the body at the 15th fret, the board itself runs to 20 frets and is beautifully finished off, ending in a flowing double curve where it meets the soundhole.

The neck itself is of two-piece maple construction with a walnut seam, joining the body in a compound dovetail joint and bears the same sunburst finish as the rest of the body. Coming to the body itself, which in spite of its hugeness, sits quite comfortably upon your knee, we have a AAA Sitka spruce top with five-ply cream and black binding with the traditional double-ringed rosette.

The large acrylic tortoiseshell scratchplate with the iconic (aaagh!) engraved floral design and the rosewood moustache bridge are the real difference makers visually, giving it a quite unmistakable presence in any company. The flamed maple back is of two-piece construction with a beautiful inlaid seam, this time with three-ply binding.

Along with the sides, it continues the luscious vintage sunburst, and is finished in a thin nitrocellulose lacquer, which lets the guitar breathe. Look inside and we find hand-scalloped X bracing to the top and all, as you would expect, is beautifully finished.

In fact the build quality throughout is faultless, superb. The electronics side of things have been entrusted to the LR Baggs Anthem system with their Tru-Mic Technology, which incorporates a condenser mic and their acclaimed Elemental pickup. The soundhole-mounted discrete preamp carries volume, phase and mix controls along with a battery test button.

The battery itself is housed in a velcroed pocket attached inside the body on the neck joint. The jack socket is, as you would expect, housed in the strap button with another button being sited on the underside shoulder of the neck. Manufacturers, every acoustic guitar should come with two strap buttons… just saying.

First thing you notice when you sit down to play it is just how sweetly the neck sits in your hand and how easy it is to play. Gibson acoustics have a reputation for being great to play straight out the box and this baby is no exception. This is in part due to the PLEK procedure they use which is a vundervar machine from Germany that dresses the frets and basically does away with any fret buzz or intonation issues.

With a slim neck allowing you to get your thumb over the top easily and a sweet low action, this really is lovely to play. The tone is clean and crisp with a well-defined tight low end. With such a big sound box, it would be easy to imagine the bottom end engulfing the top but everything is well balanced and refined.

Give it a bit of welly and it responds with great attack, not always the case on Jumbos, but with no loss of definition. In fact if you think of the sound of the acoustic guitar on Pinball Wizard that’s exactly what you get.

Fingerpicking is clear, balanced and cultured, you don’t have to work hard to play the SJ 200 the way it wants to be played. Plug it in and it continues to be extremely well behaved, with the LR Baggs Anthem system providing great reproduction of the acoustic tone with subtle variations possible from the mix dial. So there we have it, the Gibson Montana SJ 200 Standard: beautiful to look at and lovely to play with a clear balanced tone.

You can understand why it has proved so popular over the years, a glamorous, reliable workhorse, for those who can afford it… and therein might lie the only chink in its armour. From its introduction in 1938 until the late 80s, maybe even the 90s, there would have been few rivals at this level of refinement if any, but these days?

With a price tag just shy of £4k, well that’s a big lump of money, particularly when you think of some of the amazing guitars out there from the smaller luthiers, selling for £1,000 to £1,500 less. But then we suppose we come back to that word again, what makes something truly iconic?

When you buy the SJ 200 we guess you’re not just buying the guitar, you’re buying a piece of history. Just look back at all those touch points along the musical highway. Only Martin and Gibson can really claim to have been there from the start and this model, virtually unchanged since its launch, nigh on 80 years ago, always had the looks. It’s still got it and it isn’t going anywhere…