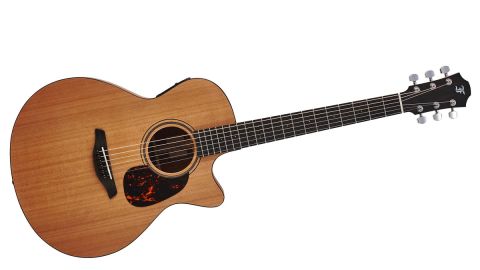 A fine guitar that has extremely pleasing acoustic and electric voices.

The Furch story starts back in the 70s when Frantisek Furch began making instruments in what was then socialist Czechoslovakia.

In those days it was difficult to find good guitars, banjos and so on in the country and anybody setting up a building service was taking a risk as such things had been forbidden under the former communist regime. Imports were prohibitively expensive and so Frantisek - a metalworker by trade and keen musician by night - began to build instruments in his garage and word about their quality soon spread among his colleagues.

Fast forward to 1989 and the final collapse of communism in Czechoslovakia and Frantisek, free from the former political restrictions, opens his first factory. By that time his reputation as a first-class guitar builder had grown, although initially his instruments were available only to the home market. Over the ensuing years the company grew in size and today occupies a 16th-century mill complex in Velké Neˇ mcˇ ice in the Czech Republic, employing 60 skilled workers, producing a wide range of acoustic guitars.

The guitar we have in for review is from the MC - which stands for Master’s Choice – range. Furch tells us that the guitar is “responsive, with deep lows”. It benefits from solid woods and the Blue GC-CM (the letters stand for Grand auditorium Cutaway, Cedar, Mahogany) sits around the £1k mark.

The first thing we notice is the weight - slightly heavier than we’d expected - and the fact that the finish here is matt satin. Furch has chosen a cedar and mahogany combo for the body woods, the top being western red cedar with African mahogany for the back and sides. The grain of the cedar is tight and straight with a light-ish reddy brown colour that will darken with age. No complaints about the mahogany, either, as everything looks in order here, too. The binding back and front of the body is faux tortoiseshell - matching the instrument’s pickguard - and has been expertly applied throughout, lending the guitar a touch of subtle bling. The rosette is a double ring of black walnut, again, superbly administered, and a peek inside the soundbox reveals the level of craftsmanship is maintained under the hood. The MC Blue GC-CM’s fretboard is ebony with a Tusq nut and string saddle, that latter sitting atop an ebony bridge.

The GC-CM’s neck continues the mahogany theme, being essentially a one-piece affair - no visible scarf joints hereabouts - with a separate piece of wood for the heel, which itself has been capped with a piece of ebony.

At this point we should pause to consider something not visible to the naked eye but a thing that Furch takes great pains to point out: the neck joint and truss-rod assembly. In our travels we’ve seen all kinds of theories from a whole assortment of lone builders and major manufacturers regarding this essential part of the luthier’s art. In the case of Furch, the brand has developed what it calls its CNR Dual Action system. Basically, this means the truss rod is capable of adjusting both concave and convex neck problems - nothing particularly new there, but the way the neck is attached to the body internally differs slightly from the norm.

The joint employs a rigid carbon casing that “maintains the neck in the set position over a period much longer than is the case with standard neck-joint designs and, at the same time, facilitates a gradual bow in the neck, a factor of essential importance for playability”. There’s also a special alloy casting located in the neck heel to make sure the neck angle maintains its position. From the look of the exploded diagram on the Furch website, this is quite a chunky piece of metal that sits on top of - and extends well into - the guitar’s heel and could explain the slightly surprising weight factor we noticed earlier. It’s an interesting idea and one that can only be proven over the course of time. For now, though, it remains sight unseen, albeit a slightly weighty reminder that new approaches are at work here.

The 45mm nut width feels fingerstyle- friendly, but if that’s a touch too fat for you, remember that if you follow Furch’s Rainbow route, you can specify the more standard 43mm - or if it’s too thin, you can ask for a whopping 48mm.

The neck has what Furch refer to as a shallow V to it and that’s exactly what it feels like to us. Sound-wise, everything is nicely in balance with a good amount of bass and resonant trebles. Experimenting with both fingerpicking and chordal strumming approaches, we’re happy. The guitar feels good in the hand and sounds good in the room.

There has been a buzz on the acoustic players’ jungle telegraph for years about Furch instruments and it’s thoroughly well deserved. Build quality is excellent and the facility to customise an instrument to your own taste is an additional bonus.

The Blue GC is a fine guitar that has extremely pleasing acoustic and electric voices. If you’re not already familiar with Furch acoustics, we would encourage you to seek them out.