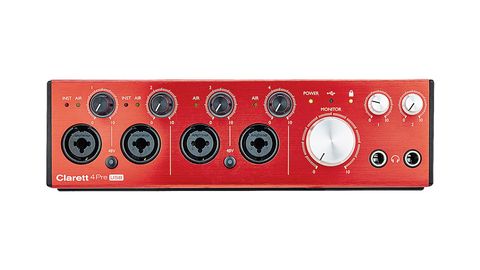 The addition of USB to the Clarett range brings these high spec’d yet reasonably priced interfaces to a wider audience.

They also required a Thunderbolt equipped computer - fine for Mac users, but not for Windows. Thankfully, the Clarett Thunderbolt interfaces are now joined by USB versions.

Much like the Thunderbolt version, this is an 18-input, 8-output interface with MIDI I/O. On the input side, that’s achieved via two combo mic/line/instrument inputs, two combo mic/line inputs, four line-level inputs, stereo S/PDIF and eight channels of ADAT optical.

Meanwhile the eight outputs comprise four line-level and two stereo headphone outs. USB operation uses the USB 2.0 protocol, nevertheless the Clarett’s USB connector is USB-C and this can be successfully hooked up to USB 2.0, USB 3.1 and Thunderbolt 3-compatible ports using one of the two included cables.

The Clarett 4Pre’s front panel includes physical controls for mic gain, 48V phantom power, monitor and both headphone levels, with LED indicators (48V and Air) and concentric input level LED ‘halos’ for the gain knobs. Still, some functionality, including engaging the Air feature and switching from line to instrument inputs, is only available via the Focusrite Control software application.

Further software-based options include sample rate and clock source selection, and also which of the physical outputs follows the front panel monitor knob. Nevertheless, the key function in Focusrite Control is zero latency output routing. Refreshingly simple to use, you can make direct assignments or customised mixes for outputs 1 and 2, outputs 3 and 4, the S/PDIF outputs, and the second headphone output.

Custom mode allows source faders to be added and outputs can be handled individually or in stereo - a nice touch. Focusrite’s iOS Control app provides input/output functionality on iPhone.

Sonically, the Clarett 4Pre is an impressive design, and the Air option, which adds noticeable enhancement from about 1kHz upwards, we found particularly seductive on vocals and guitars.

We were also impressed by its performance at my lowest buffer size of 32 samples.

Negatives? As mentioned, full functionality requires Focusrite Control to be open, a pain if you just want the instrument option. Similarly, with no onboard processing, even a basic high pass filter requires DAW level intervention. This aside we were pleasantly surprised.