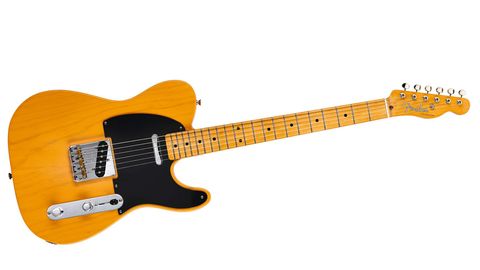 A go-to choice for players on a budget.

In recent years Fender has refreshed, refocused and renamed virtually all of its key series.

The creation of the American Professional range, which gave the long-running American Standards a considerable reboot, was one of the most inspired we’ve seen. Then it was the turn of the American Vintage guitars; they became the decade-specific American Originals - and that’s the style we have here. The new Mexican-made Vintera series amalgamates the previous Classic and Classic Player ranges into one, creating, says Fender, “a line of vintage-inspired models that embody a period-specific vibe. Each model delivers the authentic look and feel of its era, as well as decade-specific tones from the 50s, 60s and 70s.”

The reorganised range comprises seven Telecasters, five Strats, a pair of both Jazzmasters and Jaguars, and a single Mustang. Notably absent are any left-hand models. The Classic series replacements are the standard vintage-spec models - all 21 frets with 184mm (7.25-inch) fingerboard radius – while the Modified models replace certain Classic Players, vintage hot-rods if you like. These reflect numerous player mods: improved hardware, a flatter fingerboard radius, bigger frets, hotter pickups and some switching additions.

Price-wise, we kick off at £749 for the vintage models, adding £100 for the Modified models, while the Thinline Tele unsurprisingly tops the range at £999. All include gigbags. Either side of these are the Mexican Player series (previously the Standards), priced between £599 and £729, excluding gigbag, and the start-up American Performer series, which refreshed the American Specials, with a tighter price span of £999 to £1,049, including a gigbag.

So, with considerable choice, let’s take a closer look at this (rather familiar-looking) Vintera Modified model...

The Classics and Classic Players had plenty of fans, and models such as the Classic Player Baja Tele achieved almost cult status. It’s renamed here as the ’50s Telecaster Modified. It’s important not to equate ‘modified’ with ‘modern’, however. There’s nothing modern-looking about this 21-fret Tele, and while the vintage model has an all- glossed neck with an early 50s ‘U’ profile, our Modified version has a satin neck back and a Thick Soft ‘V’ profile. In keeping with vintage spec, the unmodded model has a 184mm (7.25-inch) radius fingerboard with vintage small frets contrasting the flatter 241mm (9.5-inch) radius and medium jumbo frets of our modded model.

This same duality extends to the pickups; throughout the range, they’ve been tweaked and reorganised by Fender’s Tim Shaw. So while the unmodded model shoots for vintage-style 50s single coils, our Modified version retains the Custom Shop-designed vintage-style single coil at the bridge and the Twisted Tele at the neck that we saw on the previous Baja Tele.

Control wise, the vintage model has the classic (post-1967) wiring: bridge, both (in parallel), and neck selections via a three-way lever switch. Our Modified version uses a four-way lever selector, adding both pickups in series, plus in- or out-of-phase for the combined pickups via the S-1 switched volume pot - again, exactly the same as the Baja Tele.

There’s a slight upcharge on this deeply honeyed Butterscotch Blonde model and you can clearly see through the translucent finish that the body wood is ash. The other two opaque colours - Daphne Blue and Surf Green - use alder.

If the Classics and Classic Players have rightfully achieved a reputation for affordable quality, it’s no different here. It’s pretty tidy. From the weight to the fretwork - which uses medium jumbo wire, “the perfect marriage between small vintage frets and modern jumbo,” says Fender - there is a consistency and ‘perfectly good enough’ level to this guitar. There’s a strong NOS vibe, too: the finishes and hardware gleam and shine, although all three have accurately toned neck finishes with silky smooth satin backs.

Setup, too, is very good, despite the fact that the height-adjustment screws of the Tele protrude considerably and most would have shimmed the neck. The hardtail Tele is stable, even though intonation will always be compromised by the saddles. And we do wonder if offset compensated types should be part of this Modified specification...

The vintage-style truss rod access of all three isn’t the easiest if you need to make any adjustments, but there’s little to moan about in terms of playability. As supplied, all are fitted with 0.009 to 0.042-gauge strings, which gives the guitar a slightly snappier feel and sound. We’re all different, but 10s and a little more fight to the setup wouldn’t go amiss for many of us.

As we begin running through the sounds, there really aren’t any surprises - or any sounds we haven’t heard dozens of times before. That said, the Tele comes across in terms of its circuit as the most ‘modded’ guitar of the new batch that we have had our hands on. With the selector in position 4 (both pickups in series), we have a wider humbucking-like voice - considerably bigger than the neck pickup alone. It doesn’t turn your Tele into a Les Paul, but does fill out your sound and drive your amp slightly harder. The bridge certainly captures a good Tele’s bite with some kick, too, and shifts effortlessly from country clean through gnarlier roots-rock, sounding vicious with the tone fully open or surprisingly low-output-humbucker-like with the tone pulled back. The combination of the neck shape and what seems like a nicely resonant body gets to the heart of what makes a good Telecaster. We’ve certainly played a lot worse than this. But there’s more...

Select both pickups in parallel and push down that S-1 switch and it’s far from the thin ‘strangled’ out-of-phase sound we expect: it’s less nasal and adds more bass back to create a very usable alternate mix. But select the series mix and hit the S-1 switch and it really is a strangled thin tone, which might work in a psychedelic funked-out and effected setting, but we’d suspect many might find it unusable.

A 17-strong guitar range that encompasses eight different Fender models spread over three decades is never going to please everyone in terms of colour choices or specification. And if you’re a left-hander, unfortunately you’ll have been totally ignored here. Although there are some tweaks to the pickup voicings and the look and feel of the toned necks, these are essentially guitars we’ve all seen, played and probably owned and modded, too, over the past couple of decades.

But as your gateway to the world of vintage (and modified vintage) Fender, these guitars are hugely valid, whatever they’re now called. They remain go-to choices for players on a budget and we’d suggest there’s enough refinement and a build quality that’ll surprise many sniffier punters. As ever, though, deciding which one you might want to add to your own arsenal is probably the biggest question we all have. Three down, 14 to go...