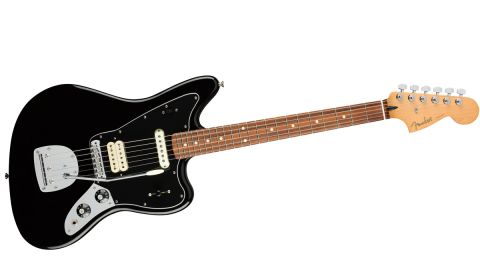 The Jaguar remains an acquired taste, but this is one of the most well-spec'd takes on the format yet.

The Jaguar has always been a curio among Fender’s range, and its Player edition is one of the line’s more intriguing offerings.

Rather than the traditional SS layout, Fender has spec’d an Alnico 3 humbucker in the bridge and Alnico 2 single coil in the neck. The plot thickens with that diddy plastic switch on the upper horn, which splits the humbucker for wiry single-coil tones. It’s styled after the original’s underused rhythm circuit, which is wisely absent here - we’d rather have a coil-split any day of the week.

The tweaks don’t end there: a Mustang bridge replaces the original Jag setup, which was prone to popping strings with aggressive or fingerstyle playing. Returning is the floating vibrato and trademark 609mm (24") short scale length, resulting in one of the better-spec’d Jags we’ve seen.

For anyone who’s never played a short-scale guitar, we implore you to get your hands on one: they’re a breeze to play, especially with this satin finish. The same goes for the pau ferro fretboard. While some early examples could be a little patchy, the grain on our review model is not dissimilar to rosewood, so there’s certainly no feeling short changed here.

Engage the neck single coil and have a play with the floating vibrato, and there’s a very familiar feel - that widescreen, crystalline single-coil sound is present in abundance. For those unfamiliar, Jag pups aren’t as snappy as a Strat or Tele’s, but make an excellent base for effects.

That bridge humbucker pays homage to Kurt Cobain’s modified Jag, and although the Alnico 3 magnets can’t come close to the output of the ceramics in Cobain’s DiMarzio Super Distortion, it can approximate that Teen Spirit snarl. The utility of the coil-split could be called into question, however.

That split humbucker is pretty thin with clean tones, and is noticeably quieter than the neck, while it yields a hollow tone in the middle position, which is unlikely to see much use. Given the pickup height on our review model was as close to touching the strings as we dared to take it, we wonder whether a higher-output ’bucker might have been better suited here.

Nevertheless, the split certainly comes into its own with dirt, as it provides a handy preset gain cut. In fact, every position finds a purpose in this context, and it’s clear that’s this Jaguar’s natural habit: rolling in filth.