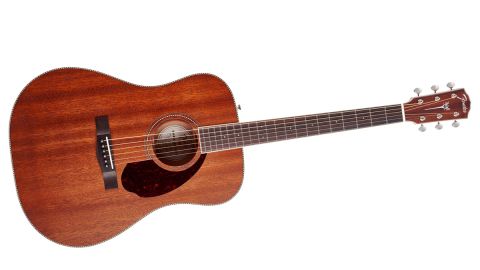 The PM-1 encompasses mahogany’s charms so well, and Fender’s “earthy and organic” claim is actually very accurate in sound and vision.

The mahogany tops have an indented texture to the grain that looks and feels vintage; a thin ‘open-pore’ satin finish leaves their organic looks unhindered. While we’re encountering more guitars in this price territory that aim for vintage Americana-style heritage, these models set a new standard for their price range.

This is a lightweight guitar, too, especially for solid back and sides builds. The PM-2 is actually neck-heavy when standing with it on the strap. For the heavy-handed among us, that might give pause for thought, but the weights feel welcoming and accessible here, with the satin ‘open pore’ necks soon beckoning. And in play, there’s the sense that it all adds to the appealing sonic qualities of this guitar.

In many respects, the PM-1 is a textbook example of an all-mahogany dreadnought boasting a lot of the character that attracts players to this wood choice, but it feels notably livelier than some we’ve encountered. Compared with our Martin D-15-styled solid-mahogany Sigma, for example, the Fender’s lighter weight seems to aid an airer tonality without losing muscular projection.

That mahogany mid voice is there in abundance with a thumpy and defined low-end, rather than the boom that we’d hope to find from mahogany. Sustaining notes shine in the upper-mids with a pleasing, rounded bluegrass quality playing with a pick. For flatpickers and those pursuing a woodier tonality, rather than steely chime, look no further.

We would’ve liked to see the Paramount preamp offered, at least as an option - widening the potential appeal this design deserves - but as it stands, this is a solid-wood acoustic with a quality hard case. A compelling sell.