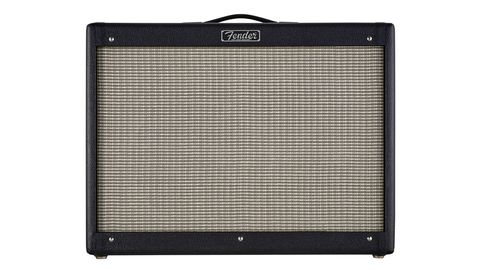 Aimed at working players at all levels, the prices are still affordable and make this new amp very competitive.

There’s a well-known saying: “if something isn’t broken, don’t try to fix it”, and for 25 years Fender’s Blues and Hot Rod range of amplifiers have done a sterling job of holding market share in the highly competitive mid-priced amplification sector.

In the early 1990s Fender’s amplification range was under growing pressure from the boutique market, which was spearheaded in the late 1980s by products like THD’s 4-10 and Kendrick’s 2410 combos; very high-quality remakes of classic Fender tweed amplifiers, utilising point-to-point hand wiring and pine cabinets with tweed (properly known as twill) cloth covering.

At the time, rack-mania was in full swing and no self-respecting guitarist was without a stereo rig with a MIDI-powered preamp, multi-effects, power amp, foot controller and a stereo cabinet or two. Despite the endless tone variations, they proved frustrating and self-defeating for many players, who spent more time fiddling with parameters and presets than playing music.

What we really needed - even though most of us didn’t know it at the time – was
a return to simpler tools with a more direct connection, and Fender’s original Blues amplifiers provided exactly that, combining a familiar blend of tweed and Blackface-era cosmetic influences with a simple valve-powered design that incorporated modern features like channel switching and an effects loop. The Blues amplifiers were re-born in the second half of the 1990s as the Hot Rod range, with a gain boost feature and revised EQ. These have been in continuous production ever since, with occasional limited editions.

A Mark III update in 2010 saw minor tweaks to the cosmetics and EQ, with a slightly more significant change from the stock Eminence loudspeaker to a Celestion G12P.

Fast forward to today and it’s time for another update: three models from the new Mk IV range: the HR Blues Deluxe IV, the HR Blues DeVille IV, and a limited edition of the Pro Junior IV. Today, we’re looking closely at the Deluxe.

Both larger Hot Rod IV combos feature the same familiar cabinet design as their predecessors, which was in turn based on the legendary narrow panel ‘tweed’ amplifiers of the mid-to-late 50s. One change that isn’t immediately visible is
a different construction material; from MDF and plywood back to the solid pine used on the 50s originals, which provides a significant weight reduction as well as improving the cabinet’s resonant properties.

The black control panel has a slightly different textured finish, with more visible graphics and ivory chicken head knobs, which don’t quite match the lettering - a very tiny annoyance that could easily be tweaked with a different shade of paint. There’s also a new ‘lightly aged’ variation on the familiar sparkle grille cloth, which blends nicely with the black textured vinyl covering.

Both of the big combos feature a new loudspeaker, the very popular Celestion ‘A-Type’, with a single 12-inch driver in the HR Deluxe.

Behind the rear panels of all three new amps, the electronics sit in robust open-ended steel tray chassis, which are secured to the cabinet top and sides with substantial mushroom-head machine screws. The layout for all three amps is more or less the same: a large vertical single-sided PCB holding most of the small components including the panel knobs and switches, linked by ribbon cables to a more robust through-plated board sat horizontally in the bottom of the chassis, which holds the valve bases. Fender has stuck with this type of layout from the beginning and while it’s more than adequate, we’d be happier with through-plating on both boards and stranded hook-up wire replacing those ribbon connectors. Nevertheless, the build standard on all three amps will certainly stand up to long-term use.

All three amps use 12AX7 preamp valves; for output power the HR IV Deluxe and DeVille both use a pair of 6L6s. The Deluxe is equipped with a traditional spring reverb, which is driven and recovered with solid-state devices, rather than the valve-powered transformer- coupled circuit Fender pioneered in their legendary ‘blackface’ designs from the early 1960s. Although the DeVille and Deluxe share the same valves, the DeVille has a beefier output stage which produces 60 watts compared to the 40 watts of the HR Deluxe and of course there’s an extra loudspeaker, substantially raising the volume levels.

The two larger combos have identical controls, just like blackface amps of the 1960s, where the output stage and speakers differed, but front panel features remained the same. There are two input jacks with high and low sensitivity, to match to the widest range of guitars. These feed footswitchable normal and drive channels, which share the familiar three-band EQ that Fender introduced on the 1950s tweed Bassman.

The normal channel has a single volume control and a bright switch for adding extra snap to mid-heavy humbuckers, while the drive channel has a preamp gain and master volume together with a ‘More Drive’ switch, which adds a large dose of extra gain.

This function is also footswitchable, giving the amps effective three-channel operation. A pair of preamp out/power amp in jacks on the top panel make it easy to connect effects pedalboards or connect multiple amps together; the third jack is for the supplied footswitch, which toggles the channels and the Drive/More Drive mode. There’s a pair of main and extension speaker jacks on the underside of the chassis and not much else.

The Deluxe amps sit squarely in Fender’s sonic home turf, with a rich clarity from the Normal channel that’s roughly halfway between the polite, slightly scooped mids of 60s blackface and the feistier midrange of 50s tweed, featuring a sweet, sparkling treble and tight bass response that emphasises low-end punch.

The Drive channel adds plenty of tweed-inspired crunch, great for blues and classic rock stuff while activating ‘More Drive’ kicks things up another notch for a smooth and fluid sustain. The drive channel circuitry has been slightly tweaked to improve note definition and while it’s a subtle change, you can hear more attack as you hit the strings harder.

There’s no particular preference for single coils or humbuckers; we used both amps with a variety of guitars including Les Pauls and Strats and they were all easy to dial in. The traditional spring reverb circuit on the Deluxe has been re-worked for a smoother sound and is a noticeable step up from previous models, surrounding notes with a halo of warm, mostly crash-free delay, although you can hear that it’s still a spring, especially as you turn up the level. Modern digital reverbs have improved to the point where they’re sonically superior, not to mention being electrically quieter and more robust; however, it’s good to see Fender keeping the spring tradition alive.

The Deluxe IV has plenty of volume for live work: if you need more clean headroom or use pedals then the extra headroom of the recently-released De Ville IV’s 60 watts and twin loudspeakers is worth paying for; however, it’s not essential and the HR Deluxe IV has more than enough poke to cover any occasion.

Fender has done a good job of incrementally improving the HR amp range over the
years and these latest versions continue along the same lines; carefully-considered tweaks here and there advance them, without drastically changing the formula we’ve come to know and love. The reduced weight and improved resonance of a real pine cabinet is probably the best thing about the bigger Mark IV amps.

Aimed at working players at all levels, the prices are still affordable and make this new amp very competitive. Now with their own history that goes back well over 20 years, the HR Series has been around for longer than those Fenders from the 50s and 60s, and the new improved Mark IV amps deserve to be future classics.