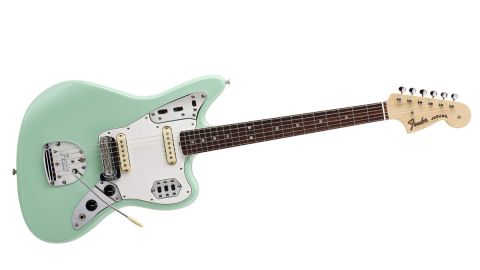 A modern take on an old favourite.

Whichever way you spin it, there are really only three ways to present a new version of a decades-old classic - as a period- correct replica, a modern updated interpretation, or as something that sits somewhere in-between.

We’ve seen numerous Fender USA line-ups since the late 80s, but today’s ranges are trimmed down and much more focused. And, in this ongoing rejiggery, 2018 sees another significant change. It’s bye-bye to the American Vintage series, which was launched back in 2012, and hello to the new American Originals.

The American Vintage models were year-specific clones – or, as close as is possible with a modern build... These new Originals, however, aim for a ‘Best of Decade’ vibe. So, for the 50s we get a Strat, Tele and P-bass; for the swinging 60s we have that trio in their ‘grown-up’ specification plus, obviously, a Jazzmaster, Jaguar and Jazz bass. The 70s - hardly Fender’s golden decade - offers us just a lone, block-inlaid Jazz bass.

Meanwhile, southpaws aren’t forgotten with a trio of guitars - 50s and 60s Strats augmented by a 50s Tele.

Price-wise the new Originals sit between the slightly lower-priced American Professionals and the only slightly higher priced remaining American Vintages starting at £1,549 for the 50s Tele, rising to £1,649 for the bound 60s Tele - the basses are slightly more dear, starting at £1,699. Today we’re looking at the reworked Jaguar.

Depending on which side of the ‘offset’ fence you sit on, the Jazzmaster and Jaguar are either Fender’s finest moments or a complete loss of direction. Whichever view you take it always makes for a great pub debate and our 60s Jaguar is a vivid reminder of the times with its abundance of chrome plates, string mute, top-mount vibrato and the rocking (as in laterally moving) bridge.

Aside from all this dressing, the elongated body with its generous edge radius and comfort contours is still married to a maple neck - with similar profile to our 60s Strat, not to mention the round-lam rosewood ’board, which, to add some upmarket appeal, is of course bound (here in a bright ‘teeth-whitened’ plastic).

Fundamentally, of course, the Jaguar, introduced in 1962, differed with its shorter 610mm (24-inch) scale which with the same gauge strings gives a plinkier, less sustaining acoustic ring compared to either of the recently-reviewed Tele or Strat.

Like the Jazzmaster that was introduced four years before, the Jaguar retains the dual lead and rhythm circuits - the latter voicing just the neck pickup with its own roller-style volume and tone control, while the lead circuit allows you to switch either pickup on or off and offers a high- pass ‘strangle’ switch - all accessed via a trio of small slide switches on the treble side of the body.

It was, and remains, a very different drive to any other Fender and despite its top-of- the-line original status back in 1962, today it appears the most archaic of all the classic Fender solidbodies.

While the Jaguar’s neck shape is quite similar to the recently-reviewed 60s Strat, its larger body contributes to the heaviest weighted guitar of the new trio of reworked Fenders - yet it produces a shorter unplugged sustain and initially, on our sample, a nasty unmusical rattle as you strum... Luckily, the fix was simple - inside the posts of the tray bridge are two pointed screws - the pivot points that allow the bridge to rock as you use the vibrato - which just needed tightening with the correct Allen key. Rattle gone.

The string mute? Well, unless you’re in a 60s rabbit hole, good luck. For the record, it’s easily removed. But it’s not only the sustain of the Jaguar, the slightly relaxed feel to bends and its more muted response, it just seems a little un-Fendery lacking the twang of the longer-scaled Tele or Strat.

Plugging in the Jaguar we’re met with a cool jazz sound and realise we’re on the rhythm circuit (neck pickup only). Switch to the lead circuit and voice the neck and there’s a touch more high-end clarity, or chop. The mix sounds thicker and a little more nasal than either of the Strats and narrower than the Tele, while the bridge has a punkier, almost cheaper-sounding honk. Engage the ‘strangle’ switch and it noticeably trims the already trim bass response.

Kick in a fuzz, distortion or juicy overdrive, however, and you immediately hear its alt-rock credentials - there’s just  a nasty (and, again, nasal) quality that is visceral in comparison to the altogether more classic rock voices we hear from the Tele’s trebly punch and the slightly thinner Strat’s bridge.

It’s similar with the vibrato performance. The Jaguar feels sloppier, less responsive, as if it’s the bastard child of Fender and Bigsby. The Strat’s vibrato feels stiffer even though only three springs are fitted. The Jaguar’s lock feature stops up bend and, if set correctly, could get out of an embarrassing string-break moment where normally you’d go very sharp with an up-tilted Strat vibrato set-up.

You’ll find these ‘fixes’ on many Fender Custom Shop models, of course, but while these don’t come with any ageing or relic’ing they are significantly cheaper.

Yet, viewed from a 2018 perspective, it gives Fender’s USA models a rare unity, a vintage nod to the escalating modernism of the Professional and ultra-tweaked and posher Elites. If you hanker after a new USA-made production Fender and want the most vintage-spec possible, this is now it. Vintage-inspired, yes, but with the fixes that many players will embrace.