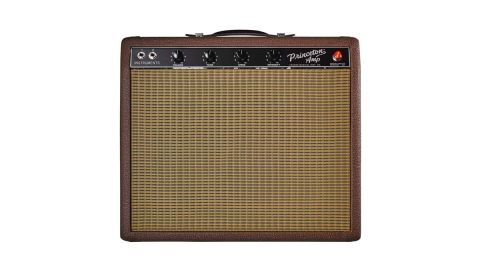 A fitting tribute to Fender’s glory years and an amp that deserves to be heard.

For many guitarists, the biggest stars of the vintage small valve-combo market are the Tweed and ‘Blackface’-era amplifiers made by Fender during the 50s and early 60s.

That’s no surprise, of course, because since their introduction, Tweed and ‘Blackface’ Champs, Princetons and Deluxes have been used by some of the world’s top players on stage and in the studio, producing many of rock’s all-time epic guitar tones.

But there’s more to Fender’s small amp heritage. Just under the radar but equally worthy are the blonde and ‘Brownface’ amplifiers made roughly between 1959 and 1963. This was a time of transition: the introduction of Tolex covering, forward-facing controls, twin channels, alternative loudspeakers and the new tremolo effect were all part of Fender’s drive to appeal to a wider range of players.

One of the most coveted amps from this period is the 6G2 ‘Brownface’ Princeton and Fender has just released a very special Custom Shop signature version of it, named for the multi-award-winning American country star Chris Stapleton.

Fender’s Custom Shop worked closely with Chris to arrive at what might be considered an idealised version of his prized originals. The Stapleton’s cabinet is made from lock-jointed pine boards for strength, lightness and resonance, expertly covered in brown Tolex, with the correct wheat speaker grille. Care has been taken to preserve original dimensions and corner radiuses, and the result is a seriously good-looking and very portable combo.

The electronics sit inside a traditional steel chassis, held firmly by four bolts in chrome strap washers. The circuit is built on an eyelet board, which is the traditional American method for valve amp building, where components are hand-soldered into strategically placed brass eyelets punched into a stiff fibre board. With a few small changes, the Stapleton’s parts and layout are very close to the original, including reproductions of the original blue Ajax coupling capacitors.

The build quality is first class, with Schumacher transformers, neatly routed wiring and perfect soldering. Our sample was the correct UK voltage but came with a moulded European Schuko plug on the end of a captive mains lead. There are grounded and non-grounded UK adaptors for this type of plug and it’s important to use the right one. We’d expect regular UK models to come with a three-pin UK plug, though.

The transition theme continues in the ’62 Princeton’s classic 6G2 circuit, which you could say sits halfway between a Tweed amp and the later ‘Blackface’ models - it has a fixed bias output stage, a cathodyne phase inverter and the famous ‘harmonic tremolo’ effect, using one half of a 12AX7 along with a few other components to modulate the output stage bias.

Controls are simple, like most Fenders from this era, with a pair of high- and low-gain input jacks feeding volume, tone, tremolo speed and intensity. One significant difference between the Stapleton and an original ’62 Princeton is the loudspeaker, which has been upgraded from the standard 10-inch to a special Eminence custom-design 12-inch. Overall, the Stapleton looks and smells right, even down to small details such as the engraved brass signature plate, leather carry handle and chrome strap washers.

The Princeton powers up smoothly with no need for a standby switch thanks to the 5Y3 rectifier, which ramps up voltages over a few seconds as opposed to the instant thump of silicon diodes. On pure all-valve circuits like this, it’s not unusual to hear a little hum while voltages stabilise, although once everything’s warmed up the Stapleton is practically free of hum and hiss.

Its clean sounds have exceptionally pleasing definition and detail, with a sweet yet bright top-end, alloyed with a balanced midrange and a punchy low-end, enhanced by the custom-designed 12-inch Eminence driver. Guitars are easy to dial in with the single tone control, which is just right for our Strat and Les Paul with the knob parked at around one o’clock. As the volume control is pushed past noon, the Princeton’s sumptuous cleans give way to a warm, punchy and very dynamic overdrive that gets thicker and more gained-out in the last quarter of the volume knob’s travel, without increasing the volume too much.

The Princeton’s tremolo effect is one of the things that make it so coveted. Linked to the output stage bias, the effect is ducked when you hit the strings hard, so single notes and chords don’t lose all of their attack. Far from simple volume up/down ramps, this tremolo is warm and lets the tone breathe. The speed range will suit most needs, although we felt it could have been moved down a little, with more range at the slow end.

There’s ample volume for smaller gigs thanks to the loudspeaker’s high sensitivity, with the best all-round sounds happening with the volume control on around two to three o’clock. The Stapleton is instant Americana in a box, generating authentic tones that sound as though they’ve been plucked straight out of 1960s Nashville, yet remaining very contemporary and versatile enough to cover many styles.

Signature models often include features that limit their wider appeal. However, where the Stapleton Edition is concerned, it’s practically identical to the original. Built with obvious respect, except for a few subtle circuit tweaks that enhance its character, and a superlative upgraded 12-inch loudspeaker, the Stapleton is perfect not just for home and studio but also small stages, where the high-sensitivity speaker makes the most of its 12-watt output.

As high-end boutique amplifiers go, it’s perhaps a little on the pricey side, but you get what you pay for and then some, as the outfit includes a unique heavy duty twill cover made by American outdoor apparel specialists Filson. Whether or not country music is your thing, Fender’s ’62 Princeton Chris Stapleton Edition is capable of sitting in many different musical genres, with one of the sweetest tones we’ve ever heard. Aimed at well-heeled amateurs, pro players and inevitably collectors, it’s a fitting tribute to Fender’s glory years and an amp that deserves to be heard.