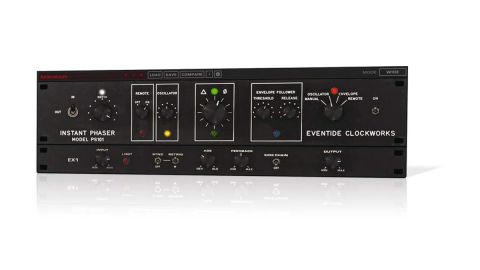 Whether you’re producing classic rock or cutting-edge electronica, Instant Phaser Mk II is as relevant and stunning as ever.

Launched in 1971 as the world’s first rackmount phaser, Eventide’s Instant Phaser presented a much more practical and (relatively) affordable alternative to tape-based flanging.

While flanging involves simply mixing the outputs of two tape decks rolling identical tape, with the speed of one deck manually adjusted to generate phase cancellation between them, phasing is an entirely electronic process, producing a more complex and sonically nuanced sound. It’s become an audio engineering staple in the half century since its invention, and is now ably delivered by countless plugins, so can Eventide’s emulation of its own historic original find a place in a very crowded marketplace?

Instant Phaser Mk II (VST/AU/AAX) looks and acts just like its real-world predecessor, but with the addition of a few new features and conveniences. The input is processed by a bank of eight or six (or both - see below) modulated all-pass filters, the output of which is mixed back in with the dry signal via the Depth knob to create the defining phase-shifting effect. One of four onboard filter frequency modulation sources can be applied at a time. The Remote source ties MIDI CC1 (Mod Wheel) to the filters, for easy hands-on movement and MIDI automation; while the Manual source knob enables direct control from the GUI, and plugin automation.

The Oscillator source is an LFO, ranging from 0.01-20Hz unsynced or 1/64 to 16 bars synced (with triplet and dotted values), and restarted by clicking or automating the momentary Retrig switch. Lastly, the Envelope Follower tracks the input amplitude to generate a control signal. The Threshold knob sets the level that needs to be exceeded for (maximum) phasing to kick in, and Release adjusts the time it takes for that phasing to drop back to zero when the input drops back below the Threshold.

Turning back the Clockworks

Eventide Clockworks’ Instant Phaser PS 101 rackmount box aimed to emulate the fiddly and decidedly specialist process of tape-based flanging for anyone with $600 to spare. Flanging and phasing were popular effects with guitarists and producers at the time, so the Instant Phaser quickly became a fixture in studios around the world. Perhaps the most famous example of its usage is to be found in Led Zeppelin’s Kashmir, where it’s liberally applied to John Bonham’s drums.

At the time, electronic delay circuits had yet to arrive in any practical form, so the Instant Phaser cleverly emulated the phase cancellation of tape-based flanging using eight all-pass filters. Each filter governed the phase of the input signal over a particular frequency range, and their movement was controlled by an envelope follower, an LFO, a knob, or CV remote control. The resulting sound - phasing - was softer and often more musically useful than straight-up flanging.

Instant Phaser’s Main and Aux outputs - with eight and six phase shifters, respectively, and, consequently, two subtly varied sounds - were often used in conjunction for a gorgeous widening effect, by routing one to the left mixer channel of a stereo pair and the other to the right. All three possible output configurations are available in Mk II: Shallow Mode emulates the Aux outs, Deep Mode is the Main outs, and Wide Mode is left/right-to-Main/Aux.

As mentioned, Eventide have added a raft of new controls, too, the most welcome of which is the Feedback knob. This routes an increasing amount of output back to the input as it’s raised, emphasising the resonant peaks for deeper, sharper, ‘bubblier’ phasing. The newly added sidechain input, meanwhile, lets you trigger the envelope follower with an external signal from elsewhere in the host DAW. And the Age knob magically deteriorates the electronic components, from brand new at 0%, through ‘1971’ at 25%, and increasingly crunchy up to about 90%, then bizarrely over-modulated and quite unpleasant above that.

While there are certainly more feature-packed and versatile phaser plugins out there, Instant Phaser Mk II’s wonderful musicality and authentic ‘analogue’ character really set it apart. With its rich, organic-sounding phasing and perfectly tasteful stereo spatialising, the tonal movement and warmly filtered vibes it brings to guitars, keys, synths, drums and vocals are nothing short of sublime.