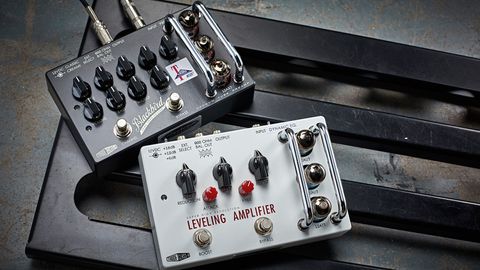 One of the best all-valve preamp pedals money can buy.

In today’s crowded market, Effectrode’s unique valve-powered pedals have won it a place in some of the most revered signal chains in the world.

Never one to stand still for long, Effectrode recently introduced a new version of its best-selling SR-71 preamp and a mouth-watering new product, the Leveling Amplifier. Today we’re looking at the SR-71.

We’ve looked at Effectrode’s mighty Blackbird drive pedal before. However, the new version has significant enhancements, as Effectrode’s Phil Taylor explains: “Pretty much every resistor and capacitor in the signal path has been adjusted in order to improve the musicality of the Blackbird’s distortion.

“Technically, we’re attempting to minimise blocking distortion, which occurs in all tube preamp circuits along with the more well- known clipping distortion. Blocking distortion can add a little grit and edge to the tone, but too much can sound harsh. I’m pretty sure this is exactly what Alexander Dumble was also working towards in his preamp sections in his custom amps in the 70s.”

In use, the new Blackbird is exceptionally quiet with almost inaudible hiss and hum levels. The drive effects cover the full spectrum of vintage and modern tones, going from Dumble-like smoothness to a more aggressive bite with practically endless sustain.

The clean channel is beautiful, with a pure, glassy treble that’s reminiscent of the best Blackface amps. The balanced output retains plenty of real-amp dynamics and takes analogue and digital EQ nicely for an infinite range of high-quality recorded sounds.

Like all Effectrode products, this new pedals isn’t cheap, but it’s unique and superbly made. The SR-71 is one of the best all-valve preamp pedals money can buy; the new balanced output makes it much more studio-friendly, while a practically infinite range of tone makes it a must-have for amp tweakers.