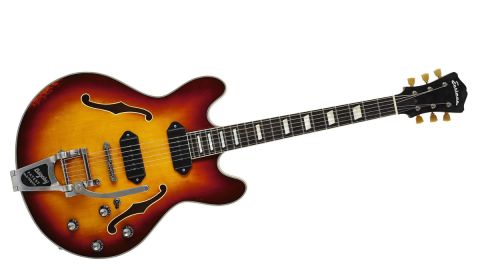 It’s hard to recall a guitar that’s made so many positive waves in our office.

The thinline semi is one of the most enduring of all guitar designs.

At home in almost any musical setting it rarely looks or sounds out of place, and is therefore one of the most versatile instruments you can own. Not surprising then that everyone wants a piece of the pie that Gibson famously first baked in 1958, when the ES-300 range launched. Since then companies as diverse as Guild, Gretsch, Fender, Höfner, Hagstrom, Heritage, Ibanez, Yamaha, Epiphone and dozens more have used the template as the basis for some fine instruments.

Today though we are examining something from Chinese manufacturer Eastman, whose products consistently impress with both styling and build. With its all-hollow construction and P90 pickups the T64/V-GB pays homage to the ES-330 and Epiphone Casino rather than the centre-blocked ES-335 etc. In fact, does the ‘64’ denote 1964 perchance; the year Paul McCartney bought The Beatles’ first Casino?

The first thing we notice is that, while the T64’s shape is broadly similar to that of a Casino the body tapers into the waist a little more and the cutaways and horns are shaped slightly differently, but in a perfectly pleasing way. Also obvious, is the ivoroid-bound ebony fingerboard with large parallelogram inlay markers (another nod to Epiphone), the bound body itself and similarly adorned f-holes.

Hardware is typical of the style with attractively aged Gotoh tune-o-matic bridge, USA-made Bigsby vibrato and a set of Gotoh relic series ‘green tulip’ tuners that look rather more convincing than those on this reviewer’s own Murphy aged R7 Les Paul.

Electrics follow the tried and trusted format of twin volume and tone pots, with a three-way Switchcraft toggle governing the upmarket Lollar P90-style pickups. Eastman has really gone to town outfitting the instrument with some of the best electrics and hardware available, and we certainly applaud them for that.

A quick word about the finish: Eastman calls it ‘antique varnish’ and it’s a six-step process carried out by the company’s team of violin and mandolin stainers and finishers. Essentially a base coat fills the grain before the colour is hand-applied then sealed with layers of French polish. The ageing doesn’t aim to ape Gibson’s or Fender’s approach of mimicking 50 years of hard road wear; instead it’s more like a high-class furniture or violin maker who simply wants to evoke the general patina of age.

It won’t have escaped the attention of the sharp-eyed that the T64’s neck has less available playing area at the top end than an ES-335 due to its 16th fret body join. Of course, this was the approach taken by Gibson on the 330 and Epiphone Casino (both built, as we all know, in the same factory), and why these models were often regarded as ‘rhythm’ guitars.

But latterly they’ve become a great choice for jazzy blues or earthy pop guitarists who don’t require 22 frets for ultra top-end widdling but prefer the added warmth of an all-hollow guitar and love that area between 3rd and 15th for perhaps more relaxed forays. Although, that said, Hendrix played a Strat whose neck, when inverted as he chose to do, also joins at the 16th fret and it didn’t exactly inhibit Jimi’s creativity. It’s a comfortable thing to play though, that’s for sure.

Eastman refers to the neck profile as ‘traditional even C’, and it reminds us of the 1960/’61-era Gibsons where there was little discernible taper from one end to the other - garnering the ‘wide flat’ moniker. With a generous 44.45mm (1.75- inch) bone nut and medium-jumbo Jescar frets it’s a chord lover’s delight. And if you do want to break out with some tasty licks and a few well chosen bends that’s all on tap too, courtesy of the medium-jumbo frets.

Sonically this all-hollow style of instrument is way more versatile than you might suspect. We’re not joking when we say that, sitting around with an acoustic rhythm guitar, acoustic bass and perhaps a cajón adding rhythm, the T64 could just about hold its own without even plugging in.

It’s loud, resonant and musical, with that mix of fat bottom and cutting top that also characterises full archtop jazzers. In fact, Al Gorgoni who played lead on Van Morrison’s Brown Eyed Girl (on a Gibson L-5), told us that Hugh McCracken played the rhythm parts on his Epiphone Howard Roberts - just mic’d up and not plugged in at all.

However, connect the Eastman to a low-wattage valve amp like our ubiquitous Blues Junior and the world opens up. Imagine how much more dynamic an ES-335 is than a Les Paul, then picture the same amount - or more - again. The Eastman and its fabulous Lollar P90s can conjure up all manner of great tones, from the plummiest jazz voice (neck pickup, tone rolled back), to that delightful ‘just pushing into drive’ sound that either the neck pickup alone or both on together can supply.

Bridge P90s can be a bit honky and, while this does have some of that, it’s also a very musical honk that, while never as sharp as a Tele, does cut through supremely well. Add further preamp gain or stomp on a nice pedal and things turn smooth and fruity (The Beatles’ album Revolver is full of such tones); or turn right down for an almost pure acoustic timbre. It’s more versatile than many guitarists could ever imagine.

It’s hard to recall a guitar that’s made so many positive waves in our office. From its looks to its lovely light weight, instantly welcoming playability and extraordinary breadth of tones it’s gained more friends than guitars costing several times the price.

No, it’s not perfectly made: there are cosmetic flaws here and there but that’s all part of hand finishing, and anyway they pale into insignificance when everything about the T64/V-GB is just so joyous. Every one will be different, too, not simply spat off the end of a production line.

Having this Eastman around has awoken a few stirrings among the players here; some who would have never considered this type of fully-hollow semi, are starting to imagine a place for one in their armoury. We’ve always had a soft spot for Eastman’s approach to guitar building, and the T64/ V-GB has cemented that in spades. And if you’ve not considered an all-hollow semi, we suggest you give one of these a try post haste. Now, how does that riff to Paperback Writer go again?