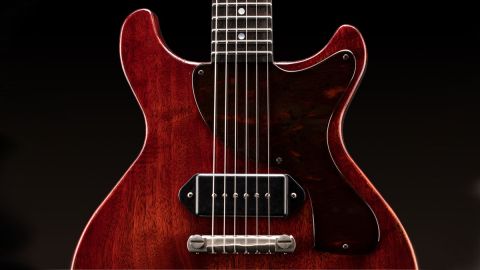 The simple arithmetic of one P-90 pickup plus two cutaways on a slab of okoume mahogany adds up to a one serious tone machine.

Eastman Guitars hasn't yet become a household name but that surely only a matter of time. If it doesn't on the back of a hugely impressive stable of acoustic and electric guitars, it's probably because our fried brains are not taking on any more household names.

The company was founded by Qian Ni as Eastman Strings in 1992 but soon evolved, and as a guitar brand it is growing up fast, with some truly formidable designs that put a fresh spin on the stone-cold classics – guitars such as the Eastman SB55DC/v.

There are no prizes for guessing the inspiration behind this; it has vintage Junior double-cut mojo all over it. The question is: does it measure up?

Let's take it from the top – the SB55DC/v has a one-piece Okoume mahogany body with a glued-in, one-piece Okoume mahogany neck that has an ebony fingerboard with pearl dot inlay. There is a single Lollar 50's Spec Dog Ear P-90 pickup in the bridge position, with a CTS 500K volume and tone control. The tone is a "no load" control that works normally from "1" through to "9" and bypasses itself on "10.

• Gibson Les Paul Junior
The accessibly priced Junior has undergone many revisions over the years but the core recipe remains unchanged, and offers excellent value for a US-made Gibson.

• Gordon Smith GS1 60
A hugely impressive singlecut slab of mahogany that is built-to-order and offers the Junior's simplicity in a variety of finishes.

The vibe is Gibson-esque, the 24.75" scale is too. There is Faber hardware on the headstock and bridge,  vintage-style tuners with metal "kidney bean" buttons and a wraparound bridge in aged nickel. The quality of components is quite something, with a sturdy Switchcraft jack, .022 Sprague Orange Drop capacitors under the hood, and – again Gibson-style – Gavitt braided wire in the circuit.

And we should say right here, the finish is a work of art, with a tactile orchestral quality to it that comes from a six-stage hand varnishing process that concludes with a French polish – a technique perfected on Eastman's violins. You'll want to hold this under the chin, too, if only to give it a good sniff. The faux-tortoise Bakelite pickguard sets this off nicely. The SB55DC/v is stunning to look at.

But, of course, those looks and that body shape bring certain expectations of tone, and it is intriguing to see how the SB55DC/v measures up against the weight of history.

The SB55DC/v might be a reassuring slab of solid Okoume mahogany but its balance feels spot-on, and its weight is very forgiving. Played acoustically, there's a loud and clear ring to it, a bold resonance that's bright and brassy. The finish and setup feel correct and proper, with the neck profile a soft C with an ever-so-slight V down the middle.

It is a vintage-modern feel, with medium-jumbo frets on a gloriously noir ebony fretboard offering little resistance to your blues-rock aspirations. That Lollar DogEar P-90 could well make them all come true.

There is a brightness to the P-90 that helps in bringing out the nuances in your leads and lets the sparks fly off big, open chords – an airy simplicity that works well for jazz with your amp set clean and the tone rolled back, and yet gradually finds a pugnacious quality as you dial in a bit more gain.

The Lollar is so articulate. It's a low output pickup but it performs as though it has no filter, swinging for the fences when your amp is dimed and you are chasing those Leslie West tones. For old rock 'n' roll, blues, country, or for a perfectly crafted exercise in simplicity, the SB55DC/v is tough to beat, impossible to put down.

MusicRadar verdict: The simple arithmetic of one P-90 pickup plus two cutaways on a slab of Okoume mahogany adds up to a one serious tone machine.

"The SB55DC/v ably reminds us why original Juniors became such punk-rock and garage-rock classics, yet it won’t slip back into its case without insisting there’s a lot more versatility here, too. Ultimately, it’s an extremely appealing guitar, and an homage done right."
Guitar Player