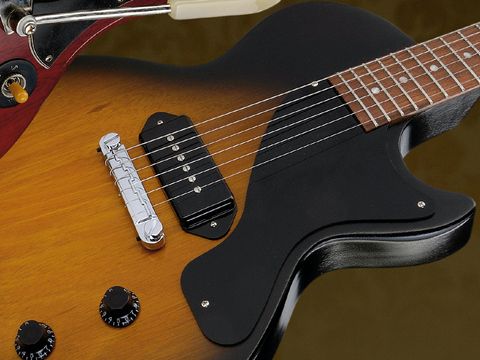 A sub-£600 USA-made Gibson electric will be a big draw for many and this Junior doesn't disappoint. A great way to experience the raw power of the real thing.

Since it was first introduced way back in 1954, the Les Paul Junior has been in and out of the Gibson catalogue on numerous occasions and has been missing from Gibson's production range, certainly in this more vintage-like spec, for some time. This Junior celebrates the original single-cut stylings seen before it changed to the more familiar double-cut in 1958.

It isn't meant to be an exact replica (you'll find examples of this from the Custom Shop priced at over a grand more) but it's still a £599 USA-made Gibson.

The 45mm body is a two-piece slab of mahogany, with a tighter edge radius than the original. The neck is one-piece mahogany and, unlike the original model's neck, which fitted into the body leaving a thin edge in the treble cutaway, this one - like the Les Paul Standard - is flush and indicates a different style of joint.

Quoted as having a "rounded" profile, the neck is a very comfortable full 'C' shape - 20.5mm at the first fret, 22.5mm at the 12th. Only a ridge where the fingerboard edge has been masked during finishing slightly ruins the fun. As you'd expect at this price point, there's no binding on the Junior, so the 12-inch radiused 'board - a light brown rosewood with acrylic dots and 22 medium frets with slightly sharp ends - is dead simple.

As seen before on guitars such as the Melody Maker, the satin finish is left quite open-grained - it's a simpler sunburst than the yellow-centred original (it's also not cellulose), more like a Cremona sunburst, but it captures the old vibe nicely and is clearly very thin.

The wrap-over stud bridge has intonation ridges (as seen on later period guitars, although here it's correctly intonated for a wound third) unlike the plain humped design of the original. Tuners are the more modern individual white-buttoned units, not three-on-strip as per the original.

The crucial ingredient is the dog-ear P-90, plus just volume and tone (with black bonnet knobs). What more do you need?

Does £599 of USA Gibson cut the mustard? Most definitely. There's plenty of cut from the pickup and a fair bit of poke too - cleaner on-the-edge-of-gain sounds need some high-end taming from either guitar or amp, but you're right there in a brash fifties/sixties style - so the garage door is open.

Up the gain and there's always a sweet spot where a good Junior - and this one is okay - achieves a perfect balance of power, juice, smoothness and clarity.

The volume control is again quite slow in its taper, unlike the original '57 Junior, which cleans up much more easily. It sounds a little thinner too with the volume reduced, but it's the ring and good neck shape that create the fun, even with some higher-gain, more modern rock-type amp tones. So long as you can control the hum, squeal and feedback, it's a unique sound and this new one gets close - certainly close enough at this price - to the classic Junior's stomping ground as a great balls-to-the-wall rock/blues machine.