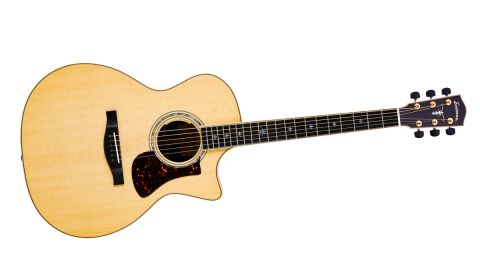 With all of the tonal colours available here, we suspect that, in the right player’s hands, this guitar could paint masterpieces.

Taking a quick poll around the office confirms that we’ve liked - loved, even - virtually every Eastman guitar we’ve seen.

The China-based company has been making waves throughout the industry with its solidbody single-cut models, with the SB59/v in particular causing some heart palpitations in this vicinity. But making electric instruments using classic old-school technique to breathtaking effect isn’t the only trick up its sleeves - this acoustic Grand Auditorium looks set to win the guitar world’s hearts and minds as well.

The first thing to look at is the whole ‘double top’ concept. In layman’s terms this means that the top of the guitar is basically a Sitka spruce sandwich with some very clever space-age material called Nomex as the filling. Obviously, the soundboard of an acoustic guitar is a large part of its tone-shaping voice and so any goings on in this area are going to form the heartbeat of the instrument’s very being. We’ll find out what effect this particular innovation has had in a few minutes, but, for now, we’ll consider the other components that have gone into the construction of this rather fabulous beast.

Back and sides are rosewood and we notice that there is a CITES certificate number inside the glove compartment of the DT30’s hard case. This should give the end user a reassuring hug from Eastman in these uncertain times regarding wood legality. Moving onto the neck, Eastman has chosen one-piece Honduran mahogany, famed as a traditional timber and all round tonal asset to an instrument’s overall soundprint. Just at the base of the headstock on the rear of the neck there’s a volute, which some luthiers regard as something of a vestigial tail, added originally to add strength to the weak part of the neck, but regarded nowadays as more an ornamental device. Whatever - it’s an attractive nod to the tradition and a welcome addition in this writer’s cosy little acoustic world.

Tuners are Gotoh’s SG301s that line up around the rosewood fronted headstock. Ebony is the choice for the fingerboard, festooned by what Eastman mysteriously refers to as being ‘Pearl Hallelujah Inlays’ in all the usual places. Other accoutrements include a bone nut and saddle, an ebony bridge and flamed maple bindings. Visually, it’s a stunner with workmanship inside and out, well in keeping with what we’ve seen from Eastman so far.

As if things couldn’t get any better, there’s an LR Baggs Anthem system fitted in the name of stage readiness. This system is rapidly becoming the go-to amplification enabler for some of the top hand builders, adding exactly the right combination of girth and airiness to an acoustic’s amplified sound. We await to hear what it can do for the DT30 when we fire up our AER Compact 60 a little later on. But first of all, we had better check out what it sounds like au naturel.

Picking up the DT30, you notice the slight late-50s Les Paul feel to the neck. It’s on the right side of chunky and sits in the hand like it was meant to be there. Some players feel a little out of their depth with a wider 45mm (1.75-inch) nut width, but here you honestly wouldn’t notice, such is the fine balance between neck width and depth. The body sits comfortably on the lap - there’s no second strap peg to test a more vertical playing position, but nothing here suggests that you’d be in for anything other than a comfortable ride should standing up be your thing.

Everything is in fine fettle, but you’re probably as eager as we were to find out what difference that space-age technology in the soundboard has made to the DT30’s soundscape. We approached it without making any presumptions at all and were very pleasantly surprised. The double top has added some weight, volume and sonority into the picture and first impressions are that the Eastman sounds a little more like a really good dreadnought. Close your eyes and you’d swear you were holding a good vintage D-28. The sound is rich without being muddy, and the dynamic range on offer is really quite stunning.

Strummed quietly, there’s no downturn in terms of tone - some acoustics tend to wimp out a little if played pianissimo, becoming thin and tinny. Not so here; even at a whisper the DT30 retains its sweetness. At the other end of the spectrum, the voice is full and hearty with just a taste of compression in the mix. It sounds ‘produced’, never becoming raucous, impolite or ungainly, but with more than enough power for those exuberantly boisterous moments on stage. Another thing we notice is what a rich range of tone there is available here: played closer to the bridge, the strings shimmer with rich, airy trebles; played more towards the neck, everything mellows down nicely.

Plugged in to our AER Compact 60, the LR Baggs Anthem springs into life losing nothing of the Eastman’s acoustic charm along the way. We doubt that any recording engineer - or front of house sound person - would have to work too hard to secure the player an excellent live sound from the DT30. Even without adjusting the onboard preamp controls and with the EQ on the AER set perfectly flat, the sound is transparent and rich.

We mustn’t forget that this is a brand-new guitar and the ageing process is going to mature the tone as the years roll by. It will be interesting to see how time affects the double top, but there’s nothing to suggest that it won’t open up like any other acoustic instrument. As with many instruments that offer us an all too short flirtation as they pass us by, we’d like to meet this guitar in a few years and see what stories it can tell us then. With all of the tonal colours available here, we suspect that, in the right player’s hands, this guitar could paint masterpieces.