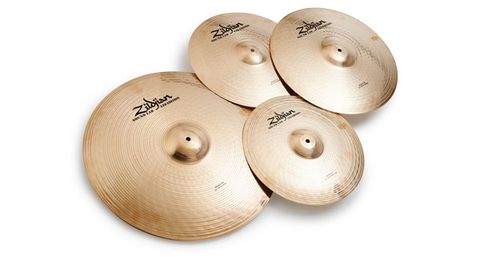 A departure for Zildjian, a step up from the ZHTs, the professional level 391s are clean looking and sounding, more Euro-style cymbals which fill a gap in the Zildjian inventory.

Time simply won't stand still, even for Zildjian, that most venerable of percussion companies. In 2014 it was 391 years since 1623, the date recognised as the start of the Zildjian dynasty in Constantinople. Hence the 391 of the series title. But what justifies highlighting this hallowed landmark?

Well, Zildjian has always employed B20 bronze (80 percent copper, 20 percent tin) for its pro cymbals. And, much more recently, lower tin content B12 (ZHT) and B8 (ZBT) alloys for its budget cymbals.

There always seemed to be a big jump from these 'sheet' bronze cymbals to the 'individually cast' professional level 'A's and onwards. But the success of European companies Paiste and Meinl in developing pro-quality cymbals using B8, B10 and B12 bronze has created an expanding market sector which Zildjian has perhaps under-exploited.

The 391 Sound Lab cymbals are designed to bridge that gap between the rather shrill ZHTs and the more refined As and A Customs. And in order to achieve this Zildjian has for the first time turned to B15 bronze alloy with its higher (15 percent) tin content.

Zildjian's Director of R&D, Paul Francis, says, "We purchase the B15 alloy from an outside supplier who casts it into a coil and then rolls it down to our thickness specifications. This is then put through a press to stamp out discs which we craft in the same way as our professional series 'A' or 'A Custom' cymbals."

What also distinguishes the 391s is a special two-stage lathing process, initially similar to that used on the A Customs but which then entails polishing and re-lathing on the bottom and top "to provide the smooth glossy sound of a brilliant finish cymbal with the bite and cut of a regular finish".

On review we have a 22" ride, 16" and 18" crashes, and 15" hats. There is a full range, but Paul affirms this is "truly a limited run. Once they are all gone Zildjian will not produce any more with this alloy".

The 15 percent tin content sits right between the eight and 12 percent of the ZBT/ZHTs and the 20 percent of Zildjian's major output.

It's an intriguing alloy, made famous by Paiste in its Signature line, and we'd venture these 391s are closer to the Paiste sound than Zildjian has approached previously. It's a departure that Zildjian fans might question, but is surely just a smart move, simply expanding the palette Zildjian has to offer.

All the 391 crashes are available in one weight, between medium-thin and medium, which gives them depth to balance out the brightness. Starting with this writer's favourite here, the 18" crash, it is dazzling yet extremely smooth. There is that glassy purity which recalls Paiste's Signatures. Okay, some of the latter have rather more complex timbres, but then they cost considerably more.

The 16" is similar but inevitably lacking some of the beef of the bigger cymbal. Both crashes cut through, but you don't always have to wallop them as being medium-thin they respond sweetly at low volumes too.

The more aggressive side of the 391s emerges with the 22" ride. It has a rather thin initial stick sound with an electro-metallic zing. But it fattens up nicely if you use a thicker, heavier stick and play it hard. This way a deeper, more balanced undertone is revealed, with full sustain and a darker wallowing crash.

Overall the vibe is brash on top yet warm beneath. The bell we found unremarkable - you need to catch it just right to get a clear ring.

Being on the large side the 15" hats again have volume and warmth. When closed the stick-tip sound is soft, not aggressive. You only get that edge when you open them up and smash them around, or play with your stick tip on the open top cymbal (as on the ride). This inherent softness also affects the pedalled 'chip' sound, which is rather muted when played in conjunction with the decidedly more piercing ride.

Although Zildjian suggests these are professional cymbals for loud rockers, we would say the crashes and hats at least have wider applications, being clean, musical and warm.