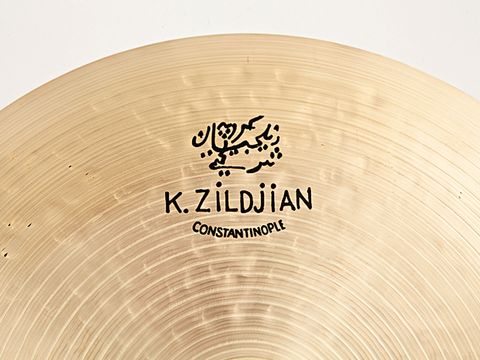 If you've got the cash, the K Constantinoples are well worth the investment.

Armand Zildjian, then president of the Avedis Zildjian Company, introduced the K Zildjian Constantinople series in back 1998.

The aim was to recreate the look, feel and ultimately the sound of the original Turkish-made Kerope Zildjian Ks. After the death of Armand in 2002, the baton was handed over to R&D director Paul Francis and his team, who continue to develop the range, creating new models and series enhancements.

The series' apparent suitability for jazz is echoed by the collaborative design input from several top jazz drummers including Adam Nussbaum with the 22" Renaissance ride, Kenny Washington 20" Bounce (and its larger 22" Bounce) and Elvin Jones with the 14" hi-hat.

Until recently the choice of Constantinople crashes was somewhat limited - in fact, there were only two - a 16" and 18". Zildjian has now added three new models to partner the existing models - a 15" and 17" crash and a 19" crash/ride.

With the exception of the Renaissance ride (which features intense 1mm grooves cascading over its entire surface), each of the other models is lathed in a similar way to the Turkish-made Ks of the 1940s and '50s.

Across the upper and lower cymbal surfaces there are tiny pin-prick grooves starting a path from the centre and spiralling their way to the outer edge. The second is a much deeper and wider groove, measuring nearly a centimetre, which follows a similar path.

On the hi-hat especially, this lathing pattern represents a considerable change to the design, which once featured 'cast' rings over its surface. The bell cups on 15", 16", 17" and 18" crashes are now similarly shaped with a slightly smaller 'vintage' style.

The bell of the 19" crash/ride however, features a fairly large domed-shape bell (similar to the bells on the Renaissance and Bounce rides), which is said to offer increased projection - an essential element for such a large crash.

The complex hammering process literally stamps each of these models with its unique sonic identity and dark tone. New for this year is additional hammering of the hi-hat and the 16" and 18" crashes, compressing the bronze alloy significantly and creating a darker tone.

The hammering on the both of the rides is so intense they almost appear to have been vandalised with a succession of large hammer blow clumps joining together to form incredibly deep indentations.

Softly 'tickling' around each cymbal demonstrates a dark and surprisingly trashy tone which is far removed from anything crisp or clean. When struck with something a little more forceful, the crashes suddenly explode, discharging a huge whooshing effect, like an unnerving gust of wind that appears from nowhere.

Once these are played in a band situation it becomes difficult to detect the trashy side; instead they seem to have undergone a slight change of character, cutting through where necessary while perfectly blending in smoothly.

With felt mallets in hand, this demonstrates another more tender side to the crashes which, with increased velocity, gently rises to form a highly musical binding, filling in the gaps and enriching any soft and tasteful musical piece.

Striking any of the other models shows a surprisingly uneven wobble, which owing to their size is more noticeable around the edges on the larger models. This is, at times quite animated, even severe, on the Bounce - it creates a frenzied wobble around the outer edge like some shiny giant jellyfish.

This cymbal takes a great deal of skill to learn how to control it - we can see exactly why this is called the Bounce! The sound produced is suitably immense, sending corkscrew waves spiraling through the air and leaving you to bathe in its wake.

The 22" ride feels simply amazing below the sticks - responding accurately and dynamically to each of the varying stick strikes and building a lush wash which just sits there comfortably in the background. The hi-hat, meanwhile, is incredibly articulate, ably demonstrated by the stick tips that dance their way across the surface where it is easy to detect each tip-hit with clarity.

Striking the edge with the shoulder moves the music up a notch or two and then opening them up a little has a similar hi-hat sound to the drum intro on Coldplay's 'In My Place' - fabulous.