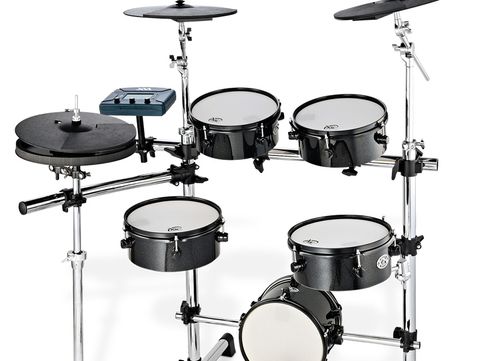 The physical aspects of the kit aren't bad at all, but the module is just plain odd. With its old look, mini-jack main output and strangely gated sounds it's out of step with the rest of the kit.

There's been a proliferation of budget electronic drum kits arriving on the market in the last couple of years. Well, perhaps 'proliferation' is over-egging the pudding, but there have been more affordable options from the likes of Techtonic and Medeli hitting the shelves than ever.

Of course the big Japanese corporations still dominate in the mid to high price brackets, but budding sticksters have never had more choice as they step onto the first rung of the ladder.

Joining the crowd in the (significantly) sub-£1,000 sector is this new XM T-5SR kit which at first glance looks like it might punch well above its weight.

The reason for the strong first impression is the XM's use of mini drum shells for its mesh head pads. Cut down versions of 'proper' shells, these are 10"x4 " for snare and toms, with a 10"x8" kick.

There's no suggestion that the shells do anything other than make the kit look funky - although they do allow for tensionable heads - but it helps set it apart and does add something of a 'real kit' vibe.

The T-5SR also benefits from a virtual hi-hat set-up, mounted on a regular hi-hat stand. Generally preferable to a lightweight plastic floor pedal and small hi-hat pad, such things again help create a familiar feel, and are typically more controllable.

The cymbals cut less of a dash, it must be said. They're well-sized at 13" in diameter, but are pretty basic slabs of plastic, with a rubber playing area covering about a third of the surface. Not that this has a bearing on their playability or longevity - they look like they'll cope with the appropriate level of abuse and come out smiling…

The rack from which all this hangs is fairly typical of lower-end offerings - generic tubing clamped together in secure if unsophisticated fashion.

Worthy of note, however, is the fact that the kick drum also clamps to the frame (it has no less than three mounts on its shell), which means no chance of it moving away from the rest of the kit while you're grooving.

Having created a pretty good impression with the hi-hat and appearance of the shell-pads, the 5SR lets itself down rather spectacularly with the aesthetics of its included XSM-5S module.

A weird, dull turquoise-y colour (which transports one back to the 1950s, before cheerful hues were invented), it's remarkably plasticky, with mini-jack only outputs and the wobbliest 'parts bin' knobs that look like they've come off a £20 guitar effects pedal. Hmmm…

First the good stuff. The mesh pads feel as good as any and the decision to mount them on shells does mean that the 5SR is a nice place to be positioned when you're working on your flam-a-diddles and shuffle feel.

With a rack as simple as this, there will be some set-up compromises when compared to more expensive options (or your more flexibly-arranged acoustic kit), but that's not uncommon with affordable electronic sets. And anyone of reasonably normal proportions will make it work without too much trouble.

But again things go a little bit awry when it comes to the brain. To start with, there are only five preset kits, which seems pretty paltry. I'm sure that the old 80/20 rule applies to electronic kit presets (where 80 per cent of the time we end up using only our favourite 20 percent of the kits on board) so we never fully utilise those kits that boast hundreds of choices.

But even so, the 5SR's menu is pretty limited. Were those five kits utterly spectacular, of course, this would hardly be an issue. As it is they're… well, actually kind of okay, but cursed with samples of weirdly short duration, so each note cuts off in gated fashion.

As such, there's a lack of natural decay and while the sounds themselves aren't too bad, response is all a bit clunky. There's also no scope for editing sounds beyond altering their sensitivity, so what you hear on first power-up is what you get.