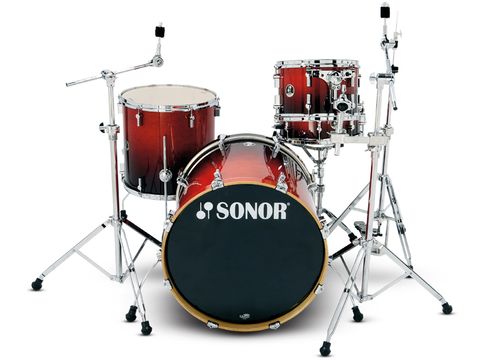 Sonor's reputation for providing excellent quality instruments extends to the lower end of its range as well as the custom kits. The manufacturing quality of the Force 2007 is excellent, with fetching finishes and well-designed and well screwed-together drums once again redefining 'mid-range'.

Sonor is well-known for its ultra-high end SQ2 system custom drums, and its off-the-peg Delite and S-Classix kits feature in many a player's 'lottery win' list. In recent years, however, Sonor's mid-range Force drum kit offerings have demonstrated that you don't have to be a Euromillionaire to play a Sonor.

The 2007 range features high-gloss lacquered natural wood finishes, with the test kit being a rather fetching 'amber fade', which is a deep burnt orange fade to black across the shells. A very nifty touch is that Sonor include one amber wooden bass drum hoop and one black one, to match the fade across the bass drum shell.

All of the shells - bass drum as well as toms and snare - are constructed with nine plies of birch, measuring 7mm thick. The tuning lugs feature 'TuneSafe' inserts - a plastic collar inside the lugs designed to prevent accidental de-tuning. The rack tom is fitted with Sonor's TAR (Total Acoustic Resonance) system, which suspends the shell by two lugs and a bolt at the shell's nodal point.

The 14"x6" snare drum is fitted with double-ended lugs, triple-flanged hoops, and Sonor's own snare strainer. All drums feature Chinese-made Remo UX heads designed specifically for Sonor. The toms have clear batters and resonants, the snare a coated batter and the bass drum a clear pre-muffled batter and black logo un-ported resonant.

Unpacking a new kit from the shipping boxes usually feels like Christmas has come early, and de-boxing the Sonor was no exception. The finish on the Force 2007 really is stunning, the depth of the fade and quality of the lacquer lending the wood grain an almost 3D effect.

The toms and snare both have flawless bearing edges, cut at a sharp 45° angle to the outer edge of the shell, and this combines with the single-ply clear heads and birch shells to give a very punchy attack. The mid and high frequencies come through very easily, accentuating the Force 2007's voice in a live environment and allowing it to cut through a wall of guitars with ease.

The standard-depth rack tom offers a wide tuning range - dropped low, you could get a deep 'rock' tone, whilst tuned up high the traditional size sounds jazzy. The depth of the 'square' floor tom means it takes longer to decay, but it never displays any unpleasant overtones.

The cannon-esque 22"x20" bass drum cuts through surprisingly well - usually such deep drums lack definition, but even completely un-damped and unported the kick has a punch more akin to a shallower drum, but with the bottom end associated with the longer size.

It is surprisingly versatile, and with a bit of tweaking could cover most musical situations. Whether you could get it through the door might in the end be the deciding factor! The 200-series hardware performs admirably, with no faults, slippage or other complaints, and Sonor's distinctive design touches lend an air of sophistication to the whole set-up.